It wasn’t long ago that Tyler Baron arrived at Tennessee with the expectations of a stellar career on the field, especially showing off his talented skill set. After the last coaching staff departed and Josh Heupel was brought in, the expectations stayed the same for the athletic pass rusher.

However, it’s taken a lot of work from Baron to get his body in the shape he can perform best at, which meant taking on a different routine.

“To be honest, I feel pretty good,” Baron said on Tuesday. “I definitely added a little bit of weight, but with that, I got a lot stronger. I am up about twelve pounds and only have .2 percent body fat. So I am feeling really good and moving well. Just excited. When I got here, I was around 250. Now I am right around 265.”

That weight is perfect for Baron, who will be coming off the edge and through the gap this season as they press the opposing offense.

But for Baron, it also starts with leadership off the field, which is something he has embraced since turning the corner from his freshman season. Tyler accepted a challenge from this staff to be the guy in every facet of the program that can lead this football team.

“Most definitely,” said Baron. “I am just trying to take a bigger role leading this team and just being a voice and representing with my actions more so than just being vocal. But yea, I am definitely trying to lead by example and just show everybody this is what we’re going to do, and this is the program we’re going to be.”

The emergence of his teammate Byron Young isn’t lost on Baron, either. Especially when it allows Tennessee to attack the opposing offense at multiple angles. But, for Tyler, it’s all about Young’s work ethic and not taking anything for granted.

“I mean, you can ask anybody on the team, Byron Young has been the most effective person. He’s taken the biggest jump that I think I’ve ever seen, it’s very impressive, and I am excited to play across from him.”

Baron added, “You guys will see, but he’s very, very impressive to watch, just as a specimen. He’s really piecing it together, and I am very excited for the season he’s going to have”.

But as with most college football players, the likelihood of having the same coordinator or position coach for four years is pretty slim. So, looking at the defense that Tim Banks wants to run, Baron feels this will give them more freedom to make plays and catch the opposing defense off guard.

“Coach Banks allows us to play a lot faster,” Tennessee DL Tyler Baron said. “He gives us less thinking to do. I am really looking forward to it because he puts us in some really good situations in terms of where the LEO’s will be at. It allows us to move around in those one-on-one situations.” 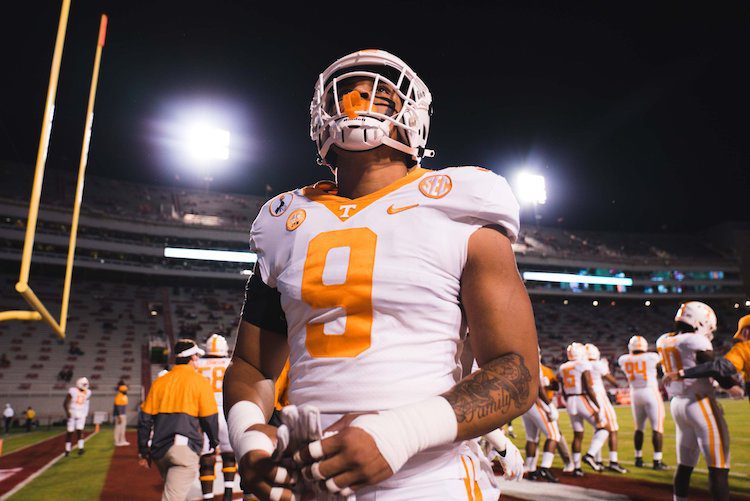 But if you wondered if Baron enjoys moving around more in this defense, it didn’t take much convincing on Banks part. The ability to show off his athletic skillset is something he’s looking forward to in this defensive system.

“I love it,” said Baron. “Coach Banks giving us the ability to have personality, put ourselves in a bunch of different situations, and show that we can do it. Whether that’s dropping in coverage or covering guys down the field or rushing off the edge or inside, he just puts us in different situations to show versatility.”

It also doesn’t hurt that Tyler is being coached by who he calls is the best combo in college football.

“I think it’s the best combo in the country,” Tennessee DL Tyler Baron said. “Coach G (Garner) comes in, and he’s very, very, very knowledgeable, arguably the best coach in the country. Coach Ekeler is also very prestigious in what he’s been doing, and I think they just pair together very well.”

So many will wonder, what’s the difference in regards to the culture at Tennessee in 2021, compared to 2020, in the eyes of Baron. Well, it’s all about the team mindset.

“From this year to last year, you almost can’t even call this the same program, it’s a totally different mindset, and people are taking more advantage of everything. It’s going to be really positive.”

Baron added, “This biggest thing for me is the mindset of the team and the mindset of the building – When everyone is looking for how they can improve, more so than just getting through. Everybody’s determined, all the new guys are buying into the program, Coach Heupel is leading us in the right direction, and we’re just happy to follow”.

It’s not just how the team is functioning but also about the mental makeup of this squad. They’ve been through the constant ringer, with not much to hang their hat on. But, with Tyler Baron taking the reigns and becoming one of the leaders this team needs, maybe the mindset of his fellow players will follow.

According to Baron, they are way past this obstacle.