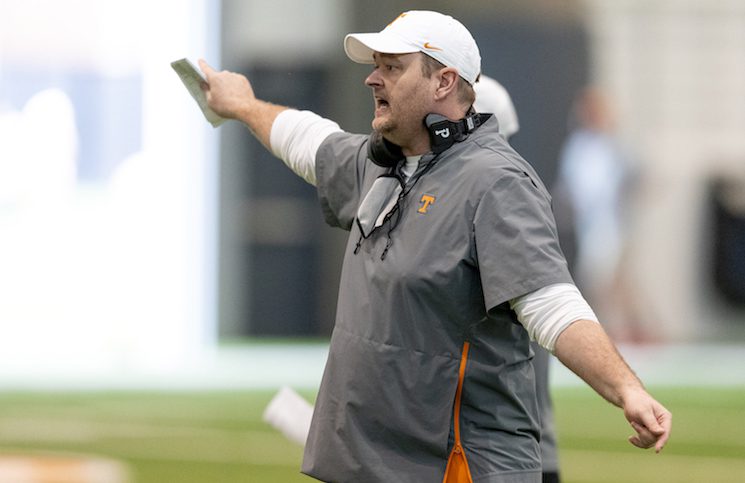 It’s been a rocky at best start for Josh Heupel and his coaching staff on the recruiting trail. The Vols’ class ranks just 27th nationally and ninth in the SEC. It ranks 12th in the SEC by average player rank.

On top of that, in the best instate recruiting class in Tennessee history, the Vols have earned just one commit from the top 20 players and will likely top out at two if things go Tennessee’s way.

Of course Heupel isn’t to blame for all of that. He’s been on the job for just under seven months and he’s recruiting for a program with very little momentum that also has the dark cloud of the NCAA over its head.

Even Auburn— who doesn’t have the cloud of the NCAA over its program— is struggling to recruit under first year coach Brian Harson. The Tigers’ class ranks last in the SEC.

There have been some positives for Heupel, too.

The biggest comes with the commitment of four-star quarterback Tayven Jackson. Blue-chip quarterbacks with Tennessee ties in Ty Simpson and Sam Horn both committed to other schools within a month of Heupel taking the job. Still, Heupel was able to pick up a commitment from the nation’s 288th best player and 21st best quarterback.

Offensive football is all about the quarterback position in 2021 and that’s particularly true in Heupel’s system.

The quickest way for Tennessee to get back to winning seven to nine games a year is with good quarterback play and the addition of transfer Joe Milton and the commitment of Jackson gives Heupel solid building blocks at the sport’s most important position in the short and long term.

For reference, Butch Jones has been Tennessee’s most succesful head coach since Phillip Fulmer— yes, very low bar— and he won one SEC game with someone other than Josh Dobbs playing quarterback.

Then there’s Tennessee’s other top commits. Addison Nichols is a fringe top 100 recruit and the offensive tackle is the highest rated commit of the Heupel era.

Tennessee only has five commits that are four stars on any sights. Four of them are on the offensive side. With one quarterback, one receiver, one offensive lineman and one tight end.

In fact, seven of Tennessee’s top eight commits come from the offensive side of the ball with four being pass catchers and arguably the group’s leader being a quarterback. Heupel is best known for developing quarterbacks and receivers so that should come as no surprise.

That’s also the fastest way for Heupel to jumpstart recruiting. If Tennessee’s offense comes out and impresses this fall, the Vols will be able to win some games and theoretically get bowl eligible.

That will help get Heupel deeper into big time quarterback and receiver prospects recruitments.

The other great opportunity for Tennessee’s program to pick up momentum is to land top five recruit Walter Nolen. Nolen plans to play his final high school season at Powell High School.

Heupel is still struggling on the recruiting trail, but the success he has had is where you’d expect it to come from. If the Vols deliver in the short term it could lead to more recruiting success down the road.