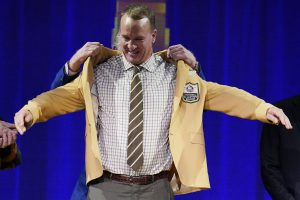 Peyton Manning at the 2021 Hall of Fame Ceremony. Photo by Denver7 News (@DenverChannel) on Twitter.

Former Tennessee, Colts, and Broncos quarterback Peyton Manning has officially been inducted into the Pro Football Hall of Fame. Manning was inducted over the weekend in Canton, along with the entirety of the classes of 2020 and 2021. Manning was elected as a first-ballot Hall of Famer in the class of 2021.

Here are a collection of the best stories, videos, and highlights from Peyton Manning’s Hall of Fame weekend.

Archie Manning, Peyton’s father, was the one to officially give Peyton his Pro Football Hall of Fame jacket.

At the Hall of Fame ceremony, Marshall Manning went around collecting signatures from Hall of Fame players. The NFL tweeted out a few videos of the interactions.

Peyton found his kids in the gauntlet ❤️

Former Patriots and current Buccaneers quarterback Tom Brady also attended the ceremony. Brady assumedly would have been at the ceremony anyway, but he also went to show his support for Manning. Brady even attended the event as a part of Manning’s personal section.

“I just need to make sure he’s really done,” Brady tweeted out last week. “Can’t risk this guy coming back…”

Tony Dungy, the Super Bowl-winning coach of Manning’s on the Colts, also attended the ceremony. Dungy was the first African American head coach to win a Super Bowl in 2007. Video was tweeted out of Dungy shedding tears during Manning’s induction.

Sitting next to Tony Dungy as his former player Peyton Manning gets his jacket.

After his induction, Peyton Manning was introduced to his Hall of Fame locker exhibit. The attraction looks to hold both his Colts and Broncos jerseys, Super Bowl memorabilia, gear from his playing days, game notes, and much more.

Tennessee football head coach Josh Heupel finished his third fall camp practice on the day Manning was inducted. However, he made sure to send his congratulations to the former Vol legend.

“Hall of fame player, even better man,” Heupel said in a tweet. “Congratulations to one of the best ever! #sheriff #GBO #HOF21“

Hall of fame player, even better man! Congratulations to one of the best ever! #sheriff #GBO #HOF21 pic.twitter.com/y623jXsxgd