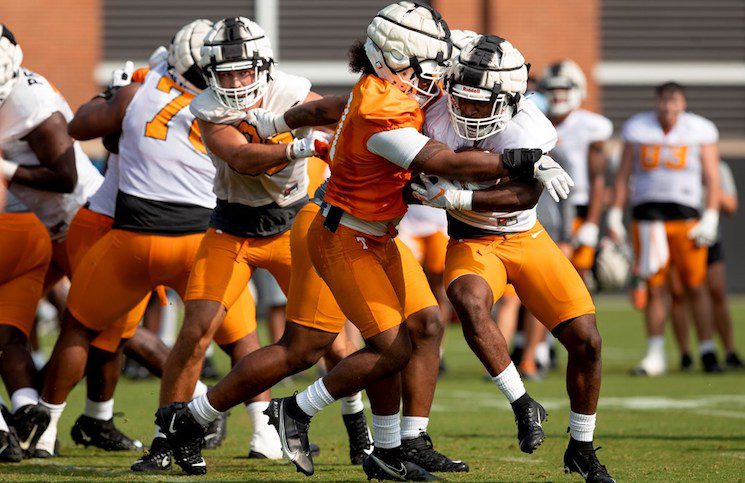 Tennessee linebacker Aaron Willis missed all of spring practice due to suspension after enrolling at UT in January.

Willis is back with the Vols and has helped Tennessee’s razor thin linebacker depth this spring “look completely different”.

The former four-star recruit is off to a strong start to fall camp but has impressed his coaches a week through fall camp.

Willis isn’t the only linebacker with the Vols that missed spring practice. Jeremy Banks was injured, Juwan Mitchell and William Mohan transferred in and Aaron Beasley was also suspended.

Still, Banks is the only player that has played a high quantity of snaps at Tennessee. While Mitchell led Texas in tackles a season ago and figures to play a major role this fall, Jean-Mary and defensive coordinator Tim Banks are still looking for more bodies.

The  highest rated signee in Tennessee’s 2021 class  has a manageable path to playing time this fall.

While the Maryland native is listed as 6-foot-1, 225 pounds, the linebacker seems much smaller and was listed as 5-foot-11 coming out of high school. Still, Willis moves incredibly well for an inside linebacker and has the talent to play plenty of snaps this fall.

He also gives Tennessee a linebacker it doesn’t have. Banks and Mitchell are both big bruisers who thrive playing between the tackles and in the run game.

Willis, however, was known for playing both the run and the pass in high school and has the speed to play sideline-to-sideline at a high level.

Whether Willis can mentally grasp Banks’ defense will be perhaps the most important factor on whether the freshman plays a major role this fall. Willis is off to a strong start though and has the talent to be an important piece to Tennessee’s defense.