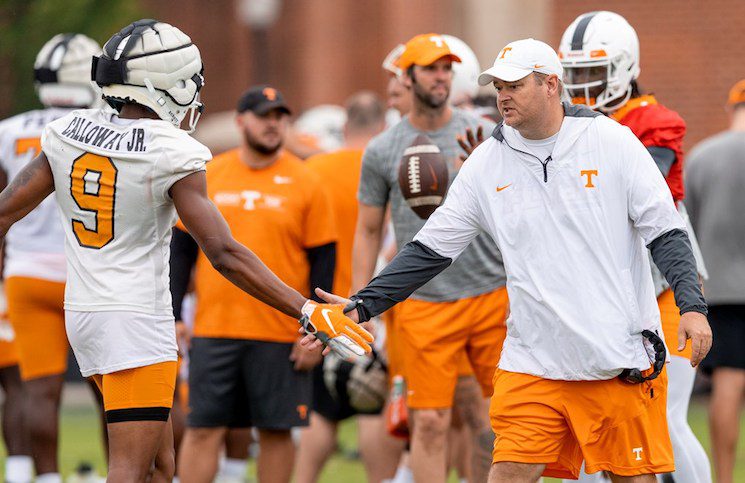 Tennessee heads to Neyland Stadium Thursday for its first scrimmage of fall practice. The Vols are just a week into fall camp but players have already emerged as likely contributors after an offseason of turnover.

Sophomore receiver Jimmy Calloway has earned frequent praise from his coaches and teammates this fall. Tennessee receiver coach Kodi Burns was no different when asked about the Georgia native Wednesday.

“Jimmy Calloway, I don’t have enough good things to say about him,” Tennessee receiver coach Kodi Burns said. “(He’s) really stepping up. Really starting to feel his body and learn how to play receiver. Was a quarterback coming out of high school. He’s really developed over the course of spring as well as the summer and it’s really showing up on the tape right now in fall camp. He’s one of the guys who’s really stepped up and started to make plays. The continuity with him and the quarterbacks— he’s starting to really feel space, starting to feel his body, really learning how to play wide out so I’ve been really impressed by Jimmy so far.”

Calloway made little impact as a freshman catching just two passes for 20 yards. However, very few receivers thrived in Tennessee’s offense as the Vols’ failed to find a productive quarterback.

The 6-foot, 190 pound receiver is playing both inside and outside this fall but has stood out with his abilities in the slot.

“We have some great receivers,” freshman Walker Merrill said. “(Jalin) Hyatt and (Jimmy) Calloway— in the slot position specifically— are two really good receivers. I’m just glad to be in the same spot as them, really just seeing how they play and taking away things they do to my game.”

Wide receiver wasn’t one of Tennessee’s weakest positions entering the fall but there were still plenty of questions about the Vols’ depth in an up-tempo offense.

Sophomore Jalin Hyatt and redshirt-senior Velus Jones Jr. have proven they’re solid contributors and Hyatt flashed the potential to be a star in his freshman season.

Calloway had a strong spring in Josh Heupel’s system but depth remained a question entering the fall. Calloway has helped ease those questions, emerging as a consistent threat and a reliable playmaker.

Playmaking is one of the most important aspects of Heupel’s offense and Burns noted that Tennessee needs more play making consistency from his unit.

With Calloway and transfer Javonte Payton, Tennessee’s receiving room is showing the potential to be one of the strengths of the team.

We’ll know more about the Vols’ wide outs following Tennessee’s first scrimmage of the fall Thursday. Still, Calloway is emerging as a potential breakout contributor as he grows more comfortable both in Heupel’s offense and playing the receiver position.