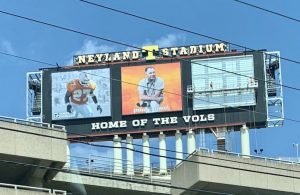 On Wednesday, Tennessee football made a significant change to their south-facing Jumbotron that overlooks the river in Neyland Stadium. In March 2018, pictures of former Tennessee football players Al Wilson and Jason Witten were added to the Neyland Stadium jumbotron alongside General Robert Neyland. However, Witten’s portrait had to come down to make room for another Tennessee superstar Wednesday afternoon.

A picture of VFL Alvin Kamara has officially replaced the picture of Jason Witten on the backside of the scoreboard.

Kamara played football for two years at Tennessee in 2015 and 2016. By the time he left Tennessee for the NFL Draft, Kamara had collected six awards and honors. Some of these included Athlon Sports Preseason Second-Team All-SEC (2016), the Paul Hornung Award Honor Roll (2016), and Lindy’s Sports SEC Newcomer of the Year (2015).

During Kamara’s redshirt-junior year at Tennessee, he led the team in all-purpose yards (1,188) and touchdowns (13).

By the time he got to the NFL, Alvin Kamara only elevated his game. The former Vol has been named to the Pro Bowl four times, was named the NFL Offensive Rookie of the Year in 2017, and is a two-time Second-Team All-Pro selection.

Jason Witten has been a tremendous ambassador for Tennessee athletics since he left college in 2002. Throughout his career, Witten was selected to 11 Pro Bowls and was a two-time First-Team All-Pro selection. But while Witten’s career is remembered in a positive light, Tennessee will benefit by finally spotlighting some of their youth. The Tennessee football team has seen a downward trajectory of success in the last decade, but players like Alvin Kamara are current fan-favorites in the NFL.

If Tennessee is having trouble selling current success to their recruits, they should take advantage of some of the individual success stories over the last decade. Good relationships with players like Josh Dobbs, Alvin Kamara, Derek Barnett, and Jauan Jennings can, and should, be used to sell the program.