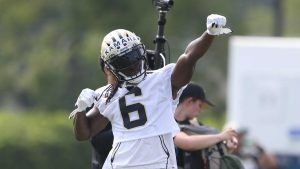 Former Tennessee running back Alvin Kamara had a surprise in store for the fans on Saturday, as he switched it up and threw on No. 6, a shout-out to his playing number while at Tennessee.

“It’s not a permanent change,” the New Orleans Saints said in a Twitter post. “Having fun with his [Tennessee Football] number

The Tennessee Volunteers, in their first season under coach Josh Heupel, will begin fall training camp this upcoming Wednesday. So, who knows, maybe some good vibes from one of Tennessee’s most beloved former players on the weekend before camp will be good luck for the team.

Alvin Kamara is the type of running back that could seemingly be a Heisman contender in the Heupel offense, but the Vols still have some horses who can run. Sophomore Jabari Small and freshman Jaylen Wright will lead the Volunteers’ ground game, as shown during spring camp in 2021.

Tennessee lost their top two leading rushers from 2020 to the transfer portal. Although, it opened the door for new opportunities for players, as well. As the Vols begin the camp on Aug. 4, the ground game will certainly be one of the most important areas to watch.

As for the reigning NFC South champions, their training camp started last Thursday. However, the New Orleans Saints and four-time Pro Bowler Alvin Kamara will enter an era without quarterback Drew Brees for the first time since 2005.

Kamara played his final collegiate season in 2016 but has recently been involved with Tennessee a few times in 2021 alone. Kamara was featured in one of the My All campaign videos done by the Athletics Department in June. However, fans had a chance to see him live and in person when he returned for the 2021 spring game.

“Back on Rocky Top,” Kamara said in a video on Twitter. “Man, where it all started. I’m feeling good. I got the ‘T’ on me. It’s Orange and White weekend… Ain’t nothing better!”

It's not a permanent change – having fun with his @Vol_Football number 🙌#SaintsCamp pic.twitter.com/byPMUcCD7d