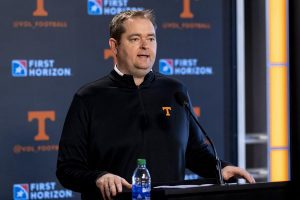 On Tuesday night, Tennessee quarterback Brian Maurer posted a caption on Instagram, which ended with him saying “#18Out”. Well, on Thursday, after the Vols completed their first scrimmage of fall camp, each coach Josh Heupel had a brief comment about Maurer, who did not show up for practice on Wednesday and did not participate in the scrimmage Thursday.

“I had an initial conversation with him at some point a few days ago as far as the reps and how things were going to be divided up,” Heupel said on Thursday.

When asked further about Maurer, Heupel said there was “no further update on him” but that the staff would “have a conversation with him during the off day here.” 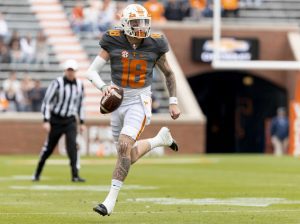 Even though he did not participate in the scrimmage, Maurer walked out of the Tennessee football complex this afternoon with a teammate. However, he is not in the transfer portal as of 1:03 ET Thursday afternoon.

Maurer threw for 541 yards starting three games for Tennessee in 2019. In 2020, Maurer fell behind Harrison Bailey on the depth chart, and the sophomore attempted just six passes. The Florida native ends his Tennessee career with two touchdown passes and five interceptions.

We will see where this situation leads, as it wouldn’t surprise me to see Maurer at practice on Saturday, based on previous cases involving the quarterback.