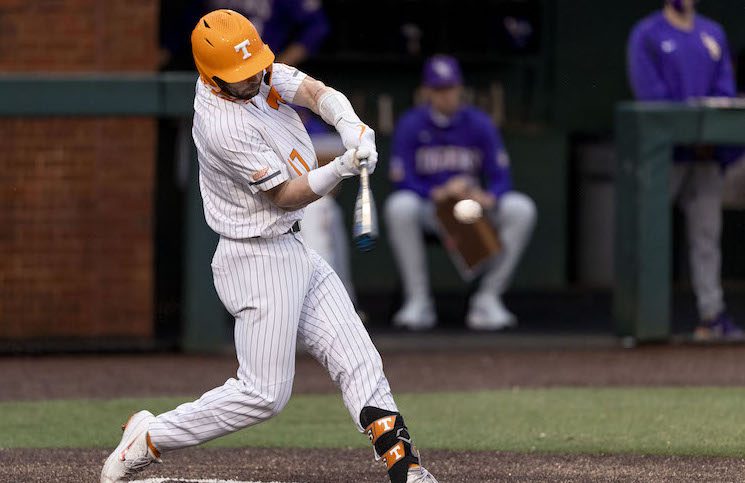 Tennessee’s 2021 baseball season was full of magical moments. The Vols won seven games on walk-offs and four on walk-off home runs. Despite all the great moments, one stands above the rest.

“The entire country knows what number one is going to be,” Tennessee catcher Connor Pavolony told Rocky Top Insider. “Drew Gilbert’s walk off in the regional. I think that’s something you won’t ever see again, I promise.”

No. 4 seed Wright State led Knoxville Regional host Tennessee 8-5 entering the bottom of the ninth inning in the opening game of the tournament.

Pavolony led off the inning with a hard hit single to third base. The three-year starting backstop was known for a lot of things at Tennessee but his foot speed wasn’t one of them.

Tennessee infielder Logan Steenstra pinch ran for Pavolony and the rest is history.

“I wasn’t even on the field,” Pavolony said. “I’m standing in the dugout and then I went in the locker room and Liam (Spence) got a hit. I came back out for Max (Ferguson) and Max gets out so I’m like nah and I went back to the locker room. (Jake) Rucker got a hit and I was like ‘I guess I can’t leave the locker room now’. I’m standing in the hallway literally just praying with my head on the wall and I heard the ping and everyone went nuts. I was like there’s now ay he just hit a grandslam. There’s no way. I walk out and everyone’s running out of the dugout and I’m like this is unreal. I almost passed out, I was screaming so loud.”

With the bases loaded and one-out, Drew Gilbert sent a 0-1 breaking ball high and far into the June sky. The no doubt, walk-off grand slam was the center fielder’s first home run in nearly two and a half months.

Before Ferguson’s walk-off home run against Arkansas, Pavolony led off the ninth with a single.

Pavolony made contributions in the ninth inning against the Raiders other than just getting on base.

“We were getting hits while I was in the locker room so I couldn’t mess with the mojo,” Pavolony said with a laugh. “I was just being a team guy.”

The rest is history, Tennessee won two straight games over Liberty to win the Knoxville Regional and swept LSU in the Knoxville Super Regional to clinch the program’s first College World Series berth since 2005.

The Baltimore Orioles drafted Pavolony in the seventh round of the 2021 MLB Draft and Pavolony signed with the franchise— forgoing his senior season at Tennessee.