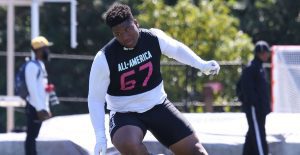 Walter Nolen, the top-ranked recruit in the class of 2022, updated the finalists for his recruitment on Friday. The five-star defensive lineman did include Tennessee in his top three. In fact, Tennessee was one of only two schools to hold onto their spot from Nolen’s top five.

Nolen made his announcement after he competed for Powell High School in Neyland Stadium on Friday night. After completing his debut for Powell in the Knoxville Kick-Off Classic, Nolen was asked if he had an update on his top three schools. Nolen answered that his new top three are Tennessee, Florida, and Texas A&M.

“It felt good,” Nolen said after the game when asked how it felt to walk out into Neyland Stadium. “I can see myself doing it again, more than one time. Really, more than three. I feel like being here now, I can see probably, maybe, calling this place home in a couple months.”

ESPN currently has Nolen listed as the top-ranked recruit overall in the class of 2022. Nolen is listed one spot lower as the second-ranked overall recruit in the nation by 247 Sports. Meanwhile, Rivals has Nolen listed as the sixth-best player in the country. Either way, Nolen is one of the most elite talents in the country at the high school level. A recruiting analyst for 247 Sports, Gabe Brooks, said Nolen “should become impact high-major defensive lineman with high-round NFL Draft ceiling.”

“Tennessee is now the front-runner in his recruitment,” Gorney said near the end of July. “The ball is in coach Josh Heupel’s and position coach Rodney Garner’s court to make it happen.”

On July 9, Nolen released a top five, including Alabama, Florida, Michigan, Georgia, and Tennessee. But as of Friday, Nolen had removed three of those five and added in Texas A&M. Tennessee and Florida are the only schools to retain their spot for five-star Walter Nolen.

As a five-star recruit, ranked at 0.992 by 247 Sports, Walter Nolen would tie the highest-rated recruit in Tennessee program history. Currently, that spot belongs to Bryce Brown of the class of 2009.