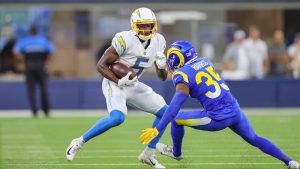 Former Tennessee WR Josh Palmer made his NFL debut for the Chargers and began his career electrically over the weekend. While playing with the Chargers’ second-string quarterback, Palmer led the team in receptions, yards, and targets on the night. In addition, Palmer had the most receptions among all receivers in the game.

On Saturday night in Los Angeles, the Chargers defeated the Rams 13-6. Palmer finished the game with six receptions for 36 yards.

Palmer’s longest reception in the game was nine yards as the wideout was targeted more on short, quick routes. The former Tennessee receiver had four receptions in the Chargers’ opening drive, including a catch on the first play of the entire game, along with back-to-back grabs.

A couple of Palmer’s catches in the opening drive were somewhat similar routes. While lined up furthest on the right side on the opening play, Palmer caught a ten-yard hitch route. Then, a few plays later, he grabbed a ball on a seven-yard hitch route down the same sideline. On the very next play, Palmer caught another seven-yard pass from quarterback Chase Daniel. And when the Chargers faced 3rd and three later in the drive, Daniel turned to Palmer for a four-yard catch up the middle.

After the first drive of the game, it was evident that either Daniel or the Chargers were trying to take advantage of Palmer’s size by getting him the ball quickly. Or maybe both.

During the second quarter and on the Chargers’ third total drive, Daniel hit Palmer across the middle for a gain of five. Daniel found Palmer again down the middle on the next play, this time for a gain of four. That was Palmer’s final catch on the evening as he did not play in the second half.

“I like working with Josh Palmer,” Harris said with a laugh. “I think he’s going to be a great young receiver.”

Harris then compared Palmer to one of the NFL’s top wide receivers in the last decade.

“He reminds me a little bit of Dez Bryant,” Harris added on.

Former Tennessee wide receiver Josh Palmer was drafted in the third round of the 2021 NFL Draft by the Los Angeles Chargers. In his preseason NFL debut, Palmer led his team, and the game, in receptions with six.

Josh Palmer wasn’t the only player who made his NFL debut from Tennessee over the weekend. Bryce Thompson had a career-first in his debut with the Saints. Meanwhile, rookie Trey Smith’s Chiefs went head-to-head with Jauan Jennings’ 49ers.