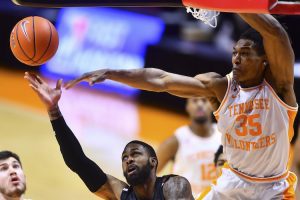 Keon Johnson could only watch from halfcourt as Yves Pons locked onto his target and took off to block a dunk at the rim. And to make matters worse for Johnson, it wasn’t the only instance, as he witnessed a Pons block up close and personal earlier in the game as well.

It seems safe to say that Johnson may have forgotten to warn his new Clippers teammates about the human SWAT Truck that he used to be teammates with.

As more Tennessee Volunteers launch their NBA careers into action and join the numerous already there, moments like the two that occurred on Monday night will become more frequent. In NBA Summer League action from Las Vegas, Johnson’s Clippers squared off against Pons’ Grizzlies. During the third quarter of the game, Johnson witnessed something that he had seen thousands of times before, although never from the opponent’s side in a real game.

Clippers forward Isaiah Hicks picked up a loose ball and went up to the basket. However, Yves Pons (No. 5) had different plans, and his former teammate Keon Johnson (No. 45) had to watch the whole thing unfold from only a few feet away. Pons promptly hammered the ball into the backboard for a block.

We watched this 2943 times before hitting send 👀@Airpons | 📺: @NBATV pic.twitter.com/d1NjxFWJaC

Then, later in the game, Keon Johnson was back on the court for an even more aggressive Pons block. This time, Pons could get a running start and get his timing down a few seconds before takeoff.

Clippers guard Jay Scrubb ended up with the ball, hustling down the court for a transition score. However, Pons was right behind him and delivered another highlight-reel-worthy block. And once again, all Johnson could do was watch. Although, likely with a different reaction than when he was at Tennessee.

Both Keon Johnson and Yves Pons are working hard to adjust to their first NBA Summer League action. Johnson is transitioning to his third team, third home, and his third city in three years. Meanwhile, Pons has already dealt with adversity in the NBA, going from undrafted free agent to signed member of the Memphis Grizzlies. His contract is an Exhibit 10 contract, a one-year deal under the minimum salary, which can also convert into a two-way contract.

Johnson, the 21st overall pick by the Clippers, averaged 8.6 points per game and 1.8 assists per game in his five games played in the Summer League. He added on 5.2 rebounds per game as well. Not to mention, the former Vol is also already getting familiar with the team’s “lob city” moniker, too.

On the other hand, Pons hasn’t been filling up the stat sheet, but he has contributed on the court. Pons averaged 1.8 points, 0.5 assists, and 1.8 rebounds in each of his four games for the Grizzlies. However, he averaged 17.2 minutes per game on the floor and totaled a +6 in the plus/minus statistic.

Monday’s matchup between Keon Johnson and Yves Pons wasn’t the only battle between former Tennessee teammates in the last few days. On Saturday night, Trey Smith made his NFL debut for the Kansas City Chiefs as they traveled to take on Jauan Jennings and the San Francisco 49ers.

The Grizzlies and the Clippers played their last Summer League game on Monday. So, that means the next time fans see Johnson and Pons will be for their NBA regular-season debut. The final day of the 2021 Summer League is Tuesday, Aug. 17.