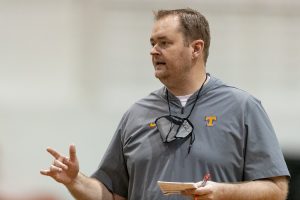 On a rainy Tuesday morning earlier today, the Tennessee football team wrapped up their second scrimmage of fall camp. The grey skies and cloudy weather didn’t hold back any optimism and excitement from the team, though, as they hit the field behind Tennessee coach Josh Heupel.

After the Tennessee scrimmage, Heupel met with the media on Tennessee’s campus to discuss his thoughts and observations on the day as a whole.

Heupel talked about what he was impressed by during the scrimmage and what he thought needed improvement. He also discussed Tennessee’s current situation regarding the quarterbacks and Brian Maurer, what he is looking for out of his players in the final few days of fall camp, and- in a word- “trust.”

“It’s about guys that you trust at this point,” Tennessee coach Josh Heupel said on Tuesday. “Guys that are going to go out and compete the way that you want them to.”

Stay tuned to Rocky Top Insider for the latest Tennessee Football fall camp coverage, as well as an array of other Tennessee sports news.