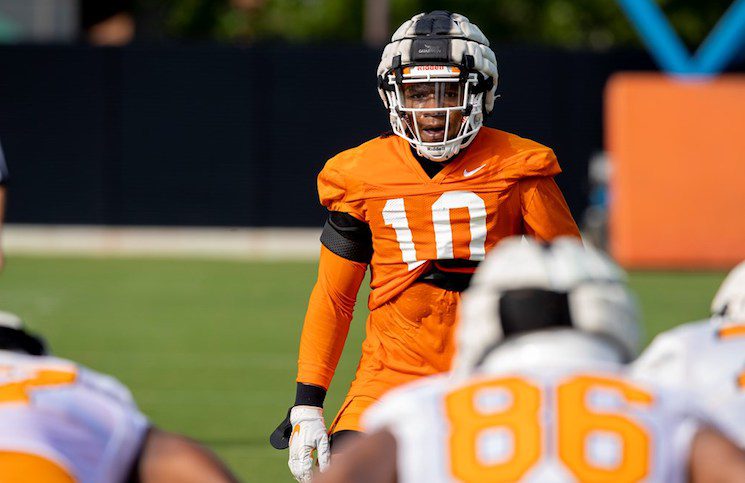 Juwan Mitchell is a man with ambitious goals. The New Jersey native went to Texas out of high school to prove he could play in the south in a state where football is king.

That desire to prove himself at the highest level is the same thing that brought the Longhorns’ 2020 leading tackler to Knoxville. Mitchell wants to prove he can compete and shine in the SEC.

The inside linebacker isn’t short on confidence in himself either.

“Linebacker one,” Mitchell said of his personal goals. “Linebacker one in the NFL Draft. Build the LBU at the University of Tennessee. The guys under me believe in it. They believe I’m going to be the No. 1 linebacker leaving and they believe it’s going to keep going like that (stacking up motion) every year from here on out.”

Joining a linebacker group that was decimated by transfers, injuries and suspensions in the spring, Mitchell was the most proven player the moment he arrived on Tennessee’s campus.

Playing as a bigger freshman in 2019, Mitchell recorded 39 tackles and three sacks. Last season Mitchell slimmed down to be more effective as a 4-2-5 linebacker and was solid. The 6-foot-1, 226 pound linebacker recorded 62 tackles in nine games.

Mitchell had a trio of double-digit tackle games.

“I found a routine that really helped me,” Mitchell attributed his success last season too. “Monday through Wednesday I’d have my coach pick me up at 5:45 and I’d be with the defensive staff breaking down film. Pretty much finding out the why they’re calling calls. It’s not just going along with the calls so I’m sitting in the meeting understanding why they’re calling that call in different situations. That helped a lot.”

So, has Mitchell figured out the why and the details of a new Tennessee defense?

The transfer is quick to point out that it’s an ongoing process but he feels good about his understanding. Mitchell attributed that knowledge to staying in a primarily 4-2-5 defense and countless time in the film room this summer.

Mitchell’s film study became easier when he got an iPad to watch film on a few weeks before fall camp.

It didn’t take Mitchell long to impress his teammates. The confident linebacker impressed with his mindset from arriving on campus this summer.

“You could just tell from his demeanor as he walks around the building what kind of guy he is,” defensive lineman Roman Harrison said.

And what is that demeanor?

“Oh, he’s a dog,” Harrison said. “He’s a straight dog. I love the way he plays. He plays fast, plays aggressive and plays smart as well. It’s going to be really fun seeing what he does on Saturdays.”

In a room without much experience, Mitchell has been challenged by more than just the new defense. The Texas transfer is trying to be a leader to the players that haven’t played the number of snaps in college that he has.

Mitchell isn’t short on confidence, and Tennessee doesn’t need him to be. The Vols are still thin at linebacker without many proven players at the top of the depth chart.

Tennessee needs Mitchell to be the “dog” they’ve seen in practice and to play with a confidence and aggression that allows him to be a tackle and play maker in the middle of an unproven defense.