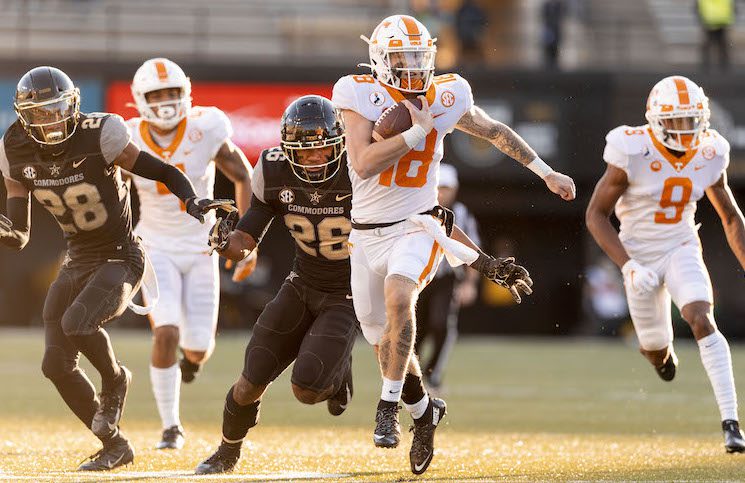 “Thank you for allowing a kid from little Ocala, Florida to call this amazing place home for the last 2.5 years playing in front of 102,455 has been the biggest blessing I could have asked for,” Maurer said in a statement. “Tennessee truly has the best fans in the world.”

“After a lot of thought and prayer I have decided to enter my name into the transfer portal and pursue other opportunities.”

The junior quarterback has been absent from Tennessee’s practices since last Wednesday after seemingly falling behind Tennessee quarterbacks Joe Milton, Hendon Hooker, and Harrison Bailey in the first week of fall camp. He was also absent during Tennessee’s first football scrimmage on Thursday morning.

Josh Heupel recruited Maurer while at Central Florida and the new coaching staff seemed like it could jumpstart his career. Maurer started the spring strong getting mostly second-team reps in the spring game.

Maurer threw for 541 yards starting three games for Tennessee in 2019. In 2020, Maurer fell behind Harrison Bailey on the depth chart and the sophomore attempted just six passes. The Florida native ends his Tennessee career with two touchdown passes and five interceptions.

Tennessee’s quarterback race is down to three with Hooker, Bailey, and Milton all still in the race. Maurer is the second quarterback Tennessee has lost to the transfer portal this summer. Freshman Kaidon Salter transferred to Liberty after being dismissed from Tennessee’s football program.

Tennessee offensive coordinator Alex Golesh said he wanted to start dwindling the bulk of quarterback reps to two to three quarterbacks by a week or two into practice and the Vols did so cutting Maurer’s reps. Tennessee has given Milton, Hooker and Bailey similar reps in open practice periods since Maurer’s absence. The trio have taken reps in that order.