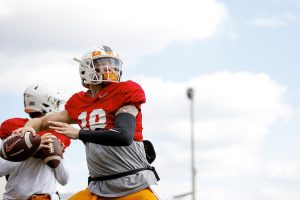 The Tennessee football team held their seventh fall camp practice on Wednesday morning. However, the team was one quarterback shorter than normal.

Tennessee redshirt sophomore quarterback Brian Maurer was not at practice on Wednesday. Although, as of late Wednesday morning, Tennessee QB Brian Maurer has not officially entered his name in the transfer portal.

Maurer’s absence from practice is especially interesting in conjunction with an Instagram post from Maurer on Tuesday night. In it, Maurer wrote a cryptic post about his immediate future to go along with a picture of him in a Tennessee jersey.

“They took my dream after 4 days…,” Maurer wrote on Instagram Tuesday night, which was then edited. “That’s okay cause I’m a soldier. #18out”

The caption was then later changed to, “I’m a soldier” with a green heart.

There is no confirmation on the correlation between Maurer’s Instagram post and his absence from Wednesday’s practice. However, it is an interesting connection as Tennessee continues to progress through their quarterback competition. 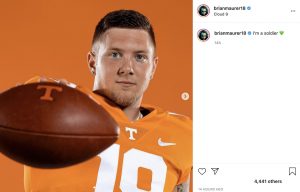 Tennessee quarterback Brian Maurer was not in attendance for football practice on Wednesday. This comes after Maurer made a cryptic Instagram post on Tuesday night and then edited it on his account. Maurer’s name has not been entered into the transfer portal as of Wednesday morning.

Check out Rocky Top Insider’s video highlights of Tennessee’s Wednesday practice, along with practice notes and observations, on our website.