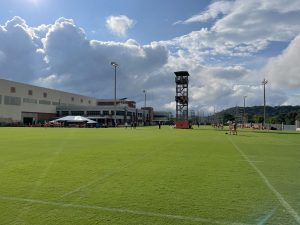 The Vols were back on the field Friday morning, as they held their 14th practice of fall camp. The team practiced in white cleats and were in shells today, as they’ll have one more practice on Saturday to wrap up the week.

It was the same rotation of quarterbacks as we’ve seen over the past two weeks. Joe Milton was taking reps with the first team, while Hendon Hooker and Harrison Bailey looked to be splitting time with the second team. The group worked through routes on-air with the WR’s, along with the TE’s. After this part, the group worked on scramble drills, which had the receivers and tight ends running their route, while a coach would yell out “scramble” and the QB’s would then find their targets down the field, while on the run. It was a bit crazy, as five different QB’s were participating in the drill, so you had footballs being thrown all over the field.

This was a chaotic, but pretty smart drill, as it put the QB’s in uncomfortable situations and made them make decisions outside the pocket. Joe Milton just has such a big arm and throws the ball with ease, as he hit a few targets down the field. I would say that Hooker and Bailey also had their moments passing the ball, but it just looks different coming out of Milton’s hand.

So, the OL seems to have a set five at the moment. Cade Mays is at right tackle, Javontez Spraggins at right guard, Cooper Mays at center, Jerome Carvin at left guard, and Darnell Wright at left tackle. We’ll see how the coaching staff uses their depth at certain spots. 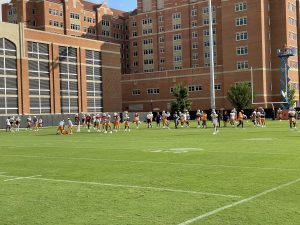 The defense was rotating stations working on run defense. Most drills involved block shedding and there was a clear emphasis on tackling. Heupel praised Tennessee’s tackling following the first scrimmage. The defensive line was divided into interior lineman and edge rushers. Morven Joseph was working with edge rushers instead of linebackers.

Tyler Baron’s footwork was fast and good. He repeatedly reset during drills faster than many of the other defensive linemen. His lower body strength and conditioning looked good. This is a positive sign, as Baron was not involved in the scrimmage on Tuesday. Matt Butler looked strong and powerful during DL drills. Hitting the bags as though he hated them. This line continues to take on the persona of Rodney Garner, which is a positive.

Velus Jones Jr. is still working his way back from a hamstring injury but looked good in his routes while we were present. The coaching staff is not going to push him, as they need him ready to go for the opener.

Jimmy Calloway was again absent from practice but is expected to be back sometime next week. This is the hope in the building, at least. He was not wearing any kind of boot on his leg/foot, so that is a good sign. The Vols need him in rotation at wide receiver.

Ollie Lane was working on the side today.

Check out Rocky Top Insider for the video footage and highlights from Tennessee’s practice on Friday.

The Vols will practice again on Saturday morning, so stay tuned to Rocky Top Insider for coverage of fall camp 2021.