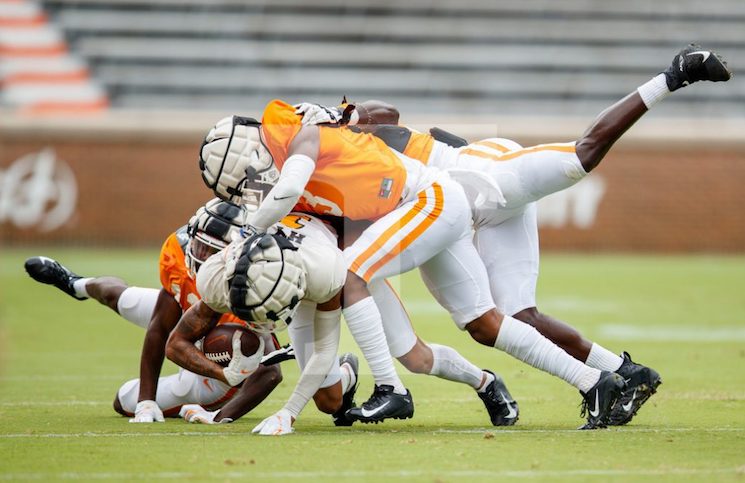 Tennessee is 15 practices into its fall camp and with kickoff 11 days away the Vols will soon transition out of fall camp an into game prep.

With kickoff right around the corner our team tackles your questions on the 2021 Vols.

How long of a leash will the starting quarterback get? It seems like we have decent talent there if we need to make a swap.

Ric Butler: I’m tempted to believe that come SEC play, I think Tennessee will have a very good idea in what they want from their quarterback position. The hope would be to start SEC play with a quarterback that you know can lead this team successfully. Until then, I do think you could see multiple quarterbacks so the staff can have in-game moments to grade. But I am interested in that, as well, considering we don’t have any previous seasons from Heupel in the Tennessee system to use as a reference point.

Ryan Schumpert: This is an interesting question and I think you’ll see Heupel and his staff ride with the game one starter— likely Joe Milton— as long as possible. Despite having three solid options, I think Heupel wants to build around one quarterback and I’ve felt since the beginning of camp they wanted Milton to be the guy. I’m interested to see how many snaps Hendon Hooker/Harrison Bailey get against Bowling Green if it’s a blowout.

Trey Wallace: I don’t think you’re going to see the flip-flopping that you’ve seen in the past. The good thing about what Josh Heupel is doing in practice, by giving Milton the best opportunity to run with the 1’s, is that he’s building up the trust and timing with other receivers. Now, Bailey and Hooker are getting their opportunities as well, but with this offense, I think you have three guys that can run the system, but one has just stood out more during the past three weeks. It would be great for Tennessee to be able to play multiple QB’s in the first game, because you don’t know how things will play out all season.

Who will take up the nickel spot and who on defense will create the most takeaways?

Ric: After watching what we watched at practice, and talked with Ryan, Trey, and other folks there, it does seem like Theo Jackson is the consensus thought for the starting nickel spot. Maybe a Slaughter, maybe a Turnage could see work there as well, but I also think Flowers’ experience in that spot helps his case and his output. I dont think opposing quarterbacks are going to be fired up to throw towards Alontae Taylor, so I think whatever combination/rotation of guys on the other side of Taylor will have chances at interceptions with a potential uptick in balls thrown that way. But also, lets talk about fumbles. I have been very impressed with how strong the defensive line looks in basic drills. Guys, like Matthew Butler, hit the practice dummies with anger. I can see maybe someone like Butler being a key player when it comes to fumbles.
Ryan: Theo Jackson appears to have taken the reigns of that spot this fall practice, working almost exclusively with corners in the open drill portions of practice. Willie Martinez talked about the need to play multiple players in the backend and I think nickel is a spot you’ll see multiple guys get reps. Doneiko Slaughter and Brandon Turnage are two other guys to watch there. The nickel is perhaps the most overlooked question mark on this Tennessee defense. The Vols got horrible play there a year ago and it showed in their inability to defend the middle of the field. Jackson becomes an incredibly important piece to this defense because of that.

Trey: I have been really impressed with the leadership that Theo Jackson has brought during the summer and fall. He seems to have a knack for this spot, but Tennessee will use multiple guys in the defensive set. You might see your safeties float down into the spot, just depending on what scheme they are in. I think a guy like Tank McCollough could create a lot of turnovers in the backside of the defense, coming up and making plays. I wouldn’t be surprised to see Juwan Mitchell cause problems for the opposing offense. He’s not Henry T level, but he can get the job done, especially with causing turnovers.

When will QB1 be named?

Ric: Probably Monday at his press conference. But, it could always be closer to, if not the actual game day, that he announces if Heupel wants to use the mystery as some sort of strategical advantage. With less than two weeks until game day, keep your eyes open for the announcement.

Ryan: My number one question going into Heupel’s Monday press conference is whether he’ll announced a starter at quarterback. All indications point to Joe Milton being their guy but it’s far from a guarantee that Heupel reveals that next week. If he doesn’t, you could hear news in his game week press conference or they could keep their cards close to their vest until the opener. With Bowling Green being the first game— instead of Pitt for instance— I think it’s more likely Heupel reveals his starter before game day, but that’s just speculation.

Trey: That’s a great question, and right now we don’t know. The consensus has been Milton for a while now, but if Heupel doesn’t name the starting QB during his Monday press conference, it could be a game week situation. He’s not really hiding anything to this point, as we’ve seen coaches across the country come out and name their starter. But, this does give the other two guys the opportunity to maybe impress him further during the opener. If you don’t see it Monday, the don’t expect it till game week, unless he decides to on a show like “Vol Calls”.

Who is going to be the kicker? How about return men?

Ric: Chase McGrath is a redshirt senior who transferred to Tennessee from USC this previous offseason. I do believe he will eventually be the lead kicker for Tennessee on the official roster. As far as return men go, I think Tennessee has so many guys that could really do well in that position. Velus, Hyatt, Calloway, man, there are a bunch that the Vols could use. Even running backs Tiyon Evans and Jaylen Wright could be productive in that role to get them on the field more as well. I’m interested to see which one of these guys did the most to catch the coach’s attention in that spot.

Ryan: Chase McGrath seems to be the likely starting kicker but I wouldn’t sleep on Toby Wilson either. Wilson was very solid last season after Brent Cimaglia opted out of the season in November. McGrath has the bigger leg which makes him the likely starter but it’s far from a lock that he’s the only guy you see this season. At returner, I have a hard time seeing Velus Jones Jr. not returning kicks unless he’s banged up or having an unbelievable season that makes it too risky to use him in the return game. Tiyon Evans, Jaylen Wright, and Jimmy Calloway will be named to watch at punt returner.

Trey: It will be Chase McGrath at kicker for the Vols. He’s had a really good summer and fall camp, especially from 40 and beyond. It was a bit rough to open the scrimmage this past Tuesday, but in a downpour, I’d expect that. I think in the return game you could see multiple guys, like Velus Jones Jr., Tiyon Evans, Jalin Hyatt, Jaylen Wright and a few others. This will be fun to watch, especially with the speed they have.

Do you think the defense will be improved? Any surprises at the linebacker spot?

Ric: Tennessee’s defense had such a hard time last year because for 10 straight games they worked in tandem with an offense that looked inept at times. The Vols defense spent so much time on the field, while playing with a deficit, and there were just so many problems in total. On one hand, I do think the defense will be better simply because it will be part of a more complete, unified team. But on the other hand, there is just a lack of talented experience, with question marks everywhere. I think there will be a learning curve for some of the Vols defensive coaches in new roles, and I think some of Tennessee’s players will really have to learn on the fly. But like I’ve said all season, I don’t think the defense that starts the year will be the one that finishes it. I think the defense will learn a lot during the year, but some growing pains might occur as well.

Ryan: I don’t believe the defense will be improved. Now I’m not sure they take some massive step back either but I just don’t see where improvement is going to come from. Tennessee is far worse off at linebacker than they were a year ago, have the same players who mostly struggled in the back end last season— particularly at safety— and lost their two best pass rushers. If Tennessee is better on defense it’ll be because of the defensive line and nickel play. I do think you’ll see a step forward from the defensive line but I don’t know if it’s enough to pull the whole group forward. As for the linebackers, there really hasn’t been any major surprises. There hasn’t been much buzz about Morven Joseph, who played outside linebacker last season, or Aaron Beasley who missed the spring due to suspension. People have spoke highly of Jeremy Banks and he is playing just his second season at linebacker. He could feasibly make a jump forward but struggled badly last season.

Trey: I think it will take some time for the defense to get comfortable, especially along the front. The secondary could surprise some folks, but they lack depth at the key positions, just like the rest of the defense. The defensive line has built up some bodies, but can that translate to on the field production, we will see. They have aggressive guys up front, but I am interested to see how they are subbed in, especially with how much they could be on the field. At linebacker, I think it’s Juwan Mitchell and Jeremy Banks, but Solon Page and Pakk Garland have done a good job at bringing them depth, along with Aaron Beasley. Could a guy like Aaron Willis step up and be a key contributor is the question, as the Vols will need him.