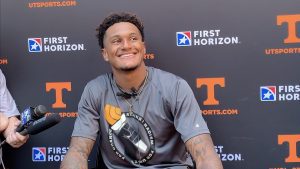 The Vols are ready to host Bowling Green on September 2nd at Neyland Stadium, just over a week away. As the team starts to prepare for the season’s opening game, the defensive side of the ball was on display Tuesday.

Tennessee defensive coordinator Tim Banks met with the media to discuss fall camp and how the team is getting prepared for next Thursday. He also discussed certain players who have stood out to him over the last few months and how they still need to find a pass rush.

Veteran safety Jaylen McCollough met with the media to discuss the defensive backfield and how his teammates have stepped up during fall camp and continue to get better. McCollough also details how Trevon Flowers has stepped up his game over the last few months.

Omari Thomas is working to become the guy that the coaches can rely on to deliver on the defensive line, especially in big moments. He switched up his jersey number and has taken on the challenge of becoming a force upfront.

As Tennessee cornerback Alontae Taylor enters another season as a leader for this secondary group, he wants to maintain his presence on the outer boundaries. Taylor has the opportunity to be a massive contributor for the Vols this season, and he’s looking to take advantage of every snap.

The Vols will continue preparing for the season opener this week before getting into “game week” mode on Saturday.

Continue following Rocky Top Insider for coverage of the 2021 season.