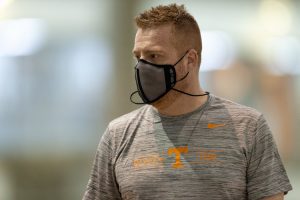 The Tennessee Volunteers will not get a traditionally scheduled game on week one, which has changed some of the team’s preparation plans. Instead of a Saturday kick-off, the Vols will take on Bowling Green on the Thursday leading up to it. So, for the first game week of the Josh Heupel era, the Vols will have some rearranging to do when it comes to their preparation.

However, not having a game leading into that week does nullify many of the disadvantages that would generally come in a shortened week. But for Tennessee offensive coordinator Alex Golesh, he doesn’t seem too concerned with the shift in routine, mainly because coach Heupel has introduced the team to a different strategy for this game.

“We’ve taken this week very much like a normal game week,” Golesh said on Wednesday. “For us, today was a Wednesday practice. Yesterday was a Tuesday practice. This has worked out for us really well scheduling-wise with the guys getting into school and us really essentially having almost two weeks to prepare like there would be a game this Saturday.”

The Tennessee football team has essentially transformed their last week of fall camp into an extended game week, which is smart for various reasons. On the one hand, no matter if a player is new or returning, the team as a whole has not gone through a legitimate game week with this staff at Tennessee. So there will be a learning process to how it unfolds, even if it is similar to how they have prepared for other college football games in the past. But on the other hand, it is equally important for the coaches to get down their weekly routine. 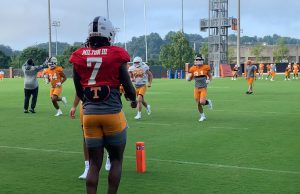 “Honestly, us as coaches needed that, to go through a normal game week before the normal game week,” Golesh said before directing his attention back towards the team. “The players needed to see it.”

While a shortened week is often a significant disadvantage for a team, having less time to prepare, the Tennessee team is making sure they don’t have that problem. Instead, the team is getting ready to play as if they had a game this Saturday.

“Again, the tempo of play, how we operate on offense, we don’t have a vast menu of a million plays,” Golesh said on Wednesday. “Hence, we’ve got to tighten it down and really prepare as if Saturday was game day. I think Coach Heupel allowing us to do it this way has really helped. Again, yesterday was a Tuesday, today is a Wednesday, we walk off the field in a normal game week, and tomorrow would be a walkthrough. Then we have ‘fast Friday’ on Friday.”

However, that does raise a fascinating point. And after all the work that the team has put into fall camp, coach Golesh is asking himself the same question. 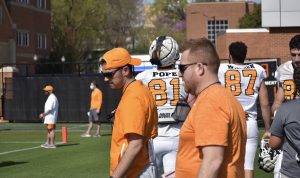 “As we’re treating it like a game week, do I feel like we’re ready? I’m glad we have an extra four days, but I think we’re about as ready as we’re going to get as if we were playing on Saturday,” Golesh said.

While the Tennessee Volunteers continue to prepare for their season opener in just eight days, it is worth noting that the team has made strides since camp began. For example, quarterback Joe Milton missed spring camp and has had to learn everything needed in a short amount of time. But it isn’t just Milton that has had to do that. All the extra work that the Tennessee players have put into this year has been to redefine the trajectory of Tennessee football. In addition, the linebacker position, in particular, has made a lot of improvement since camp began.

“The first one would be our linebackers, with who we had, the number of bodies or lack of bodies that we had at that position during the course of spring ball,” said coach Heupel on Monday when asked about the most improved position on the team. “Getting a couple of guys back healthy off of injuries helps.”

The Tennessee Volunteers will kick off their season on Thursday, Sept. 2, in Neyland Stadium. Stay tuned to Rocky Top insider for more continued Tennessee football coverage.