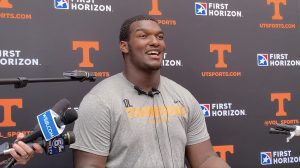 The Tennessee football team is just days away from their opening contest against Bowling Green this Thursday night. As the players and coaches finish their final preparations for the game, some of the veteran Vol players spent a minute talking to the media on Monday.

Each one of the players talked about some of the experiences from fall camp and how the work they did will transition to the game field. They also talked about their expectations for their position units, along with what they have seen playing against the team in scrimmages.

Coach Josh Heupel also spoke to the media on Monday. During his press conference, Heupel announced Tennessee’s starting quarterback for week one.

“There’s a lot of pride in the room,” Butler said on Monday. “Not only are we playing to do well for the team, setting the tone for the defense, but there’s also a sense of pride in the room. We are the veterans. We’ve seen this program through the trials and tribulations.”