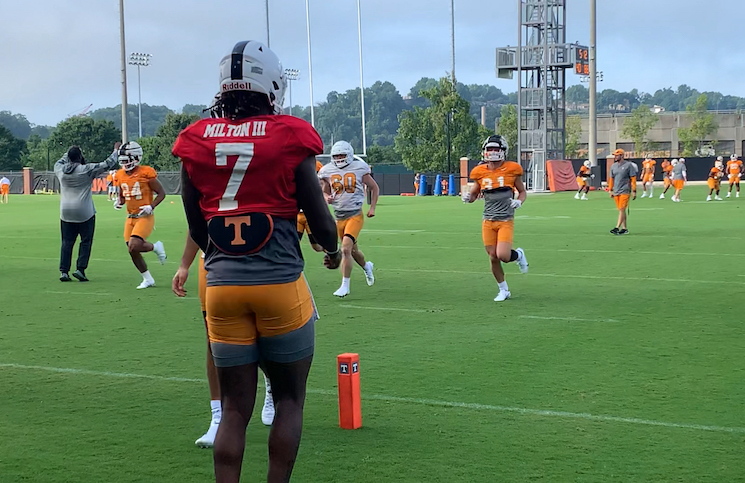 “At the end of the day, Joe’s grasp of our offense in a short amount of time, his growth during the middle portion of training and his acceleration in what we are doing with his physical attributes and decision making led us to put the ball in his hands for the first game,” Heupel said Monday.

Heupel wasn’t ready to name a backup quarterback as of Monday.

Milton is the only quarterback on Tennessee’s roster that didn’t go through spring practice, announcing his plans to transfer to Tennessee in late April.

Milton went right to work learning the Vols’ offense after arriving in Knoxville. That work paid off for the Michigan transfer as he was able to beat out Virginia Tech transfer Hendon Hooker and Harrison Bailey.

“He’s really done a good job, really a great job of fitting in, adjusting, learning, growing,” Tennessee offensive coordinator Alex Golesh said. “He spent a bunch of time in May, June, July learning the system. He’s a football-smart young man. He’s played in games that matter. For him, it’s just been a terminology, a progression, a read. The way we coach quarterbacks is unique. I think Joey (Halzle) has done an incredible job with him, doing the very best he can to prepare him.”

The 6-foot-5 quarterback’s talent was clear all fall, possessing the best arm strength and ball of any quarterback on Tennessee’s roster.

Milton’s ability to extend plays also impressed this fall. While being a running quarterback isn’t integral in Heupel’s offense, having a player who can get out of the pocket and make plays is, especially behind what could be a shaky offensive line.

The Pahoki, Florida native started earning first team reps midway throughout camp and extended work with the first team the past week and a half according to Heupel.

“He has practiced with the one group for the last 7-10 days, somewhere in that range,” the first year head coach said. “I think we came out of our second scrimmage and felt like he had taken some positive steps in a shorter amount of time, as far as time on task. We continued to break up those reps pretty much evenly, Joe got a majority with the first-team offense there for the last part of training camp and here into this game week.”

Last season at Michigan, Milton threw for 1,077 yards, four touchdowns and four interceptions on 56.7% passing. The then sophomore was solid in his first three games but a thumb injury limited him the rest of the season where he saw limited playing time.

That thumb is back to 100% now and Milton believes people will see his full talent this fall.

“My thumb feels great, 100% healthy now, and that’s pretty much why I can’t stop smiling,” Milton said earlier this August. “Every day I walk into the building, it’s a new me. Last year I lost it, and I know what it feels like to have half of your body and half of your hand. So it’s just a new me.”

Milton and Heupel will make their Tennessee debut Thursday night when the Vols host Bowling Green at Neyland Stadium. Kick off is set for 8 p.m. ET and the SEC Network will broadcast the opener.