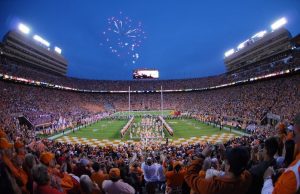 Neyland Stadium, the home of the Tennessee Volunteers, received some extensive upgrades this past offseason. When he took the job at Tennessee, Athletic Director Danny White wanted to give the football stadium some modern upgrades. One of which is a brand new multi-colored LED light show, which will illuminate the stadium in different colors and patterns.

The light show trend has been taking over college football of late. Teams like Alabama, Auburn, and several other programs have been installing them in the last few years.

The Neyland Stadium Lights have been revealed👀🍊 Thoughts?? pic.twitter.com/UWUiUbZX0G

The video on Twitter has received over 23 thousand views in the first 12 hours of its release. It shows various colors, patterns, and overall movement from the spotlights.

Tennessee said it was bringing in “a vibrant, state-of-the-art LED lighting system” during its original announcement. In addition, Tennessee noted that the “dramatic LED light show will accentuate pregame and in-game festivities.”

When AD White decided to install the LED lights, he thought about all of the stadium’s fans, specifically the students.

“The game-day experience starts and stops with our student section,” White said on Vol Calls on Aug. 25. “We have to have them in the stadium, packed the entire game. We need their engagement, we need them to have an awesome time. Probably the LED light show is more impactful to them than some more of our other folks, but we’re going to do some things that are exciting for everyone in the stadium. I think people will see that we’re really trying to cater to fans of all ages.”

At the end of the day, Danny White is trying to make a trip to Neyland Stadium a unique experience.

“As we enter the 100th season of Tennessee football at Neyland Stadium, we have some new gameday elements in store to welcome our fans back,” first-year Director of Athletics Danny White said. “We’ll continue to evaluate our gameday experience, seek fan feedback and identify opportunities to enhance the way things look, sound, and feel while still honoring the traditions and pageantry that make fall Saturdays on Rocky Top so unique.”

Find out more about the additions to Neyland Stadium, the home of the Tennessee Vols, for its 100th season in 2021 here.

The Tennessee Volunteers will debut their new LED light show this Thursday during the Vols’ season opener.