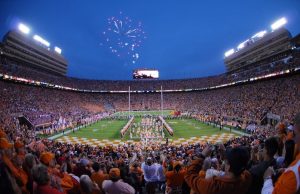 Less than 24 hours remain until the Tennessee Volunteers season is officially underway. To kick off Neyland Stadium’s 100th season, the Vols will host Bowling Green at 8:00 p.m. ET.

Tennessee dropped a brand-new hype video on Wednesday night to celebrate and build anticipation for Thursday’s opener. The video highlights some of the best Tennessee moments and players over the last 100 seasons until building into a crescendo featuring the 2021 Vols.

Former Tennessee offensive lineman Ramon Foster was the narrator in the video. Foster, nicknamed “The Big Ragu,” played 11 seasons in the National Football League for the Steelers.

Also heard in the video is the iconic voice of John Ward, along with Josh Heupel and other various current coaches.

Tennessee will officially kick off its season on the SEC Network at 8:00 on Thursday. However, the Tennessee baseball team will host a home-run derby at 4:00 p.m. ET before the football game. All donations from the free event will be donated to middle Tennessee flood relief efforts.

Where past and present converge.