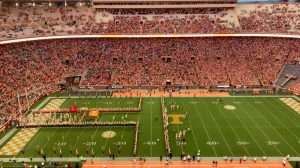 The Pride of the Southland Marching Band Forming the T for Tennessee. Photo by Rocky Top Insider.

The Tennessee football team wasn’t the only hometown group on Shields-Watkins field Thursday. The University of Tennessee’s Pride of the Southland Marching Band also had their season debut on game day.

And as expected, they didn’t miss a beat.

The Pride of the Southland went through their typical pregame routine on Thursday night. But with the return of fans, the sunset over Neyland Stadium, and the refreshed feel in the air, the band seemed to have a little extra pep in their step.

The band brought the football team onto the field as they went through their various formations on the field. They started by spelling “V-O-L-S” before transitioning into the classic UT logo. Then, they switched into the Power T, before moving into “U-S-A” for the National Anthem.

Tennessee took down Bowling Green by a score of 38-6 on Thursday night. The game, which officially kicked off the Josh Heupel era, also began the 100th season in Neyland Stadium.

Below are some video highlights of the Pride of the Southland band and their routine before the Tennessee opener.

Running Through The T