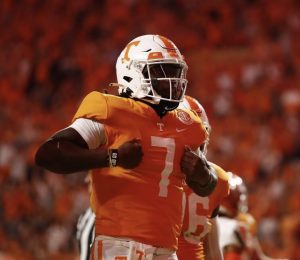 As they typically do, the numbers from Thursday’s college football matchup between Tennessee and Bowling Green tell a fascinating story. Overall, Tennessee’s statistics during game one gave a good idea of what Tennessee may bring to the table this season. Even after just one game under head coach Josh Heupel, Tennessee looks like a completely different team than the team that left the field in 2020.

The game between Tennessee and Bowling Green, which officially began the Heupel Era in Tennessee, took place in Neyland Stadium. The official attendance at the game was 84,314.

Below are a collection of interesting statistics from Thursday’s opener in Knoxville.

Tennessee did not win the time of possession battle, but their game plan didn’t seem to have that goal. On Tennessee’s opening drive, the Vols’ offense averaged 13 seconds in between plays. The opening drive, which did end up as a touchdown, took 11 plays and went for 67 yards. Tennessee had about as perfect a game plan as they could have hoped for on their first two possessions. The offense moved with a sense of urgency and efficiency down the field.

Tennessee went with an exclusive hurry-up offense that featured three receivers, a tight end, and a running back on their opening possession. Tennessee went back and forth between two formations on the drive. One had two receivers to the left with the tight end between the offensive line and quarterback. The other formation just saw the tight end split out to the slot on the right side.

In the first quarter, Tennessee’s offense had 17 rushes (64 yds) and 11 pass attempts (95 yds). Then, in the second quarter, the Vols offense put out three rushing attempts for three yards and four passes for five yards. Meanwhile, in the third quarter, Tennessee really made the complete shift to the run game.

Tiyon Evans was arguably the most electric player offensively for Tennessee against Bowling Green. The JUCO transfer tied as the team leader in rush yards with sophomore Jabari Small. Both players finished the game with 116 rush yards, although Small had 22 attempts compared to Evans’ 16.

Evans also had the two longest Tennessee runs on the night, going for 21 yards and 19 yards, respectively.

Redshirt junior Cedric Tillman had Tennessee’s only touchdown reception, which came in the fourth quarter.

Quarterback Joe Milton III, in his Tennessee debut, ended the game with 140 yards in the air on 11-of-23 passing. He also added in 44 yards on the ground along with two touchdowns.

Tennessee’s defense created havoc all night, primarily thanks to a good showing from the defensive line. The line didn’t account for a large number of total tackles (7), but their presence was felt with their intense rush all night long.

Tennessee defensive lineman Tyler Baron and Terry both came away with a sack on the night as well.

The Tennessee defense held Bowling Green to 14.3 percent on third downs, converting only two of their 14 opportunities. In addition, the Vols held the Falcons to just 1.5 yards per rush in the game.

In total, the Tennessee offense averaged 5.1 yards per rush against Bowling Green on Thursday. Led by Milton, the Vols also averaged 12.1 yards per completion through the air.

Tennessee was penalized five times during the game compared to Bowling Green’s 11 penalties.

Tennessee defeated Bowling Green by a score of 38-6 on Thursday, Sept. 2. The Vols will be back in Neyland Stadium on Saturday, Sept. 11, in a game against Pittsburgh at noon ET.