One of the benefits of a season debut on a Thursday night is the limited competition for viewership, which means that most people who were turning into the college football weekend appetizer had their eyes on Tennessee and Bowling Green. That includes former Florida quarterback and current SEC Nation host, Tim Tebow.

On Friday, Paul Finebaum brought Tebow on as a guest on his daily show. The two spoke about several topics, including the Tennessee opener. Tebow spent some time breaking down the debut performance of Tennessee quarterback Joe Milton III. He also talked about his first impressions of the Josh Heupel offense but did note one big obstacle that he still sees as the Vols move forward.

“I also think Joe Milton, their quarterback, I think he made some good plays,” Tebow said on Friday’s Paul Finebaum Show. “You could see his talent, but he’s also got a lot of ways he can learn and adapt. He had quite a few middle-of-the-field throws that were open that he either held on to it or he took sacks. He held onto the ball too long at times.”

Milton was 11-for-23 in his first game in a Tennessee uniform. The junior quarterback threw for 140 yards and a touchdown in the air while adding in 44 yards and two touchdowns on the ground. Overall, there were times where Milton looked sporadic, but he did show that he possesses many unique skills on the football field.

In addition, this was the first game in the Heupel era, and the Milton era, at Tennessee. The offense was never going to have a finished product in week one when it had a four-man quarterback competition at the start of fall camp. Instead, the offense is a work-in-progress and will continue to be one. Especially early in the season. 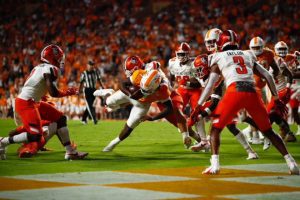 Quarterback Joe Milton III rushing the ball in for a touchdown. Photo by Tennessee Athletics.

“It looked like a first game in a new offense,” Tebow said on Friday. “I really do like Josh Heupel and his offensive mind. I think he’s a really good offensive coach.”

However, Tebow did note something that still stands out as an early obstacle in the Tennessee program.

“But Tennessee still has a lot of culture-changing to do,” Tebow said. “I think it’s a good start. They got a W.”

Tebow is right in the sense that a program’s culture doesn’t change overnight, nor does it change after one victory. But, Tebow is only half-correct from up-close observation.

On a few occasions in the fall, various Tennessee players spoke about how much more fun it is to be in the building in 2021. None of the players made the statements to talk down on the previous regime, but more so to praise the current staff’s environment.

“From this year to last year, you almost can’t even call this the same program,” sophomore defensive end Tyler Baron said earlier this fall. “It’s a totally different mindset, and people are taking more advantage of everything. It’s going to be really positive.”

From the outside looking in, it looks like more of a matter of sustaining the new culture the staff has brought in and building upon it each day. Rather than finishing some sweeping changes that have yet to be made.

“So, I think they made some good strides,” Tebow said. “But they’re still a long way away from where some Tennessee fans want them to be.”