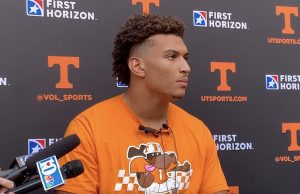 After a successful start to the season, the Tennessee football players were back in the facility on campus  Monday. After practice, a few of Tennessee’s top playmakers from week one against Bowling Green spoke to the media. In addition, coach Josh Heupel also had his Monday afternoon press conference after practice.

Tennessee will host Pittsburgh on the football field in Neyland Stadium this upcoming Saturday. Before the season, the game was rebranded to The Johnny Majors Classic, to honor a football legend that spent time at both Tennessee and Pitt.

The Johnny Majors Classic, which will feature the Panthers and the Volunteers, will take place at noon ET on Saturday. Both the Pittsburgh and Tennessee football teams will be looking to begin their season 2-0 respectively. The opening line for the game was released on Sunday afternoon. However, the Vols will have to defend their home turf as an underdog in the Johnny Majors Classic.

“Being a leader in our scheme and our locker room is really easy,” Baron said on Monday. “Everybody is really bought into the program. It’s not just one individual leading, I feel like everybody on our team is a leader. We all help each other be better and just go head-to-head. Iron sharpens iron.”

“It was an amazing experience,” Tremblay said about playing his first game in Neyland Stadium. “I had a lot of fun. The energy was there, and the fans were unbelievable. The fans are really engaged here. It was a lot of fun. I was a little nervous at first, last year being a Covid year we didn’t really have many fans. But the energy was great. I loved it.”

“I feel like any defensive team wants to keep every team out of the endzone and have a big ole donut up there with zero points,” Taylor said on Monday. “But we gave them two opportunities to kick field goals where they drove the field on us and got big chunks in the game. I felt like if we had kept our composure and executed a little bit better we’d have a big zero at the end of the game.”