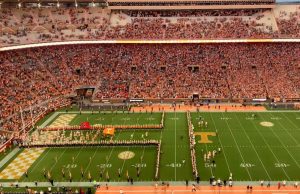 Tennessee will host Pittsburgh in the Johnny Majors Classic on Saturday, Sept. 11.

Tennessee only began the week as a slight underdog in the opening line for their upcoming game against Pittsburgh. However, towards the end of the week, Tennessee’s underdog status has only grown. As of Thursday afternoon, the line has expanded by a couple of points, depending on the outlet, in favor of the visiting Panthers.

Tennessee began the season on the right note after defeating Bowling Green 38-6. However, Pittsburgh was also dominant in their opening week against UMass. The Panthers took down the Minutemen by a score of 51-7, in which Pitt threw for 375 yards while picking up 223 on the ground.

In Tennessee’s win over Bowling Green, quarterback Joe Milton III threw for 139 yards on 11-of-23 passing. Meanwhile, Tennessee had a massive game from both of their running backs. Jabari small led the team in carries (22) and had 117 yards on the ground. Meanwhile, JUCO transfer Tiyon Evans led the team in rushing yards (120) on 16 attempts. However, Evans’ status for Saturday’s game against Pittsburgh remains unclear.

The Volunteers’ are 0-1 against the spread in the Heupel Era. The Panthers, however, are 1-0 after flying past a -37.5 line on Saturday.

The kick-off is set for noon ET as the Tennessee Volunteers will host Pittsburgh in the Johnny Majors Classic. Tennessee is currently a 3-to-3.5-point underdog in the betting line against the visiting Pittsburgh Panthers.