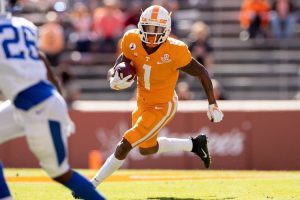 Tennessee has officially revealed what uniform combination they will be wearing against Pittsburgh this Saturday. And for anyone that loves the color orange, Saturday’s game will be for them.

Tennessee made the announcement on their Twitter account on Thursday night. The Vols last wore their all-orange uniforms against Kentucky on Oct. 17, 2020.

Saturday’s Johnny Majors Classic will honor the life, career, and legacy of Johnny Majors, a legend of both Tennessee and Pittsburgh’s history.

The Tennessee Volunteers are currently an underdog to Pitt, and the week has seen the line move more in favor of Pittsburgh throughout. Tennessee head coach Josh Heupel spoke to the media in Knoxville on Thursday, where he gave some last-minute team updates before Saturday’s contest. In addition, the Vols’ leading rusher from week one, Tiyon Evans, remains questionable for Saturday’s game.

ESPN will have the broadcast on Saturday at noon ET when the Volunteers host the Pittsburgh Panthers. Tennessee will be wearing their all-orange uniform combination for Saturday’s week two game.