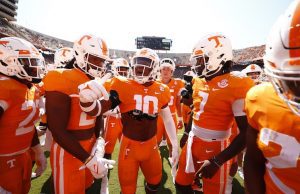 The Tennessee football team getting ready to play Pittsburgh on Sept. 11, 2021. Photo via Tennessee Athletics.

Saturday afternoon’s game between Tennessee and Pittsburgh was a back and forth slugfest for 60 minutes. The inaugural Johnny Majors Classic delivered a fireworks show between both teams with 75 combined points. But after Tennessee shot out with the lead in the first quarter, Pittsburgh took a lead and didn’t give it back to the Vols for the rest of the game. And while Tennessee’s players gave everything they had until the final play, the Vols’ comeback attempts kept falling short.

There are more variables to count that could have affected Tennessee’s outcome on Saturday. However, the statistics point to two significant areas that constantly slowed down or derailed Tennessee’s attempts. And those were turnovers and penalties.

During Pittsburgh’s 41-34 victory over Tennessee, the Vols lost the turnover and penalty battle. Tennessee had 13 penalties on the night, giving up 134 yards in the process, according to UT athletics. But the first half especially killed the Vols, giving up ten penalties in total just five minutes into the second half. Meanwhile, Pittsburgh didn’t have the cleanest game either. While the Panthers racked up nine penalties for 76 yards, those 60 yards of difference did prove crucial.

Looking back through his career, Tennessee head coach Josh Heupel is no stranger to penalized teams. Heupel’s 2020 UCF team was the fifth most penalized in college football, according to TeamRankings. It’s not to directly say that Heupel’s teams are undisciplined, though. Josh Heupel’s offenses are known to push the tempo, and Tennessee’s “fastest offense” in week one also proves that. But while the speed and the rhythm attempt to throw off the defense, sometimes, it can end up backfiring due to a false start or illegal snap.

Regardless though, having an up-tempo offense shouldn’t be a get-out-of-jail-free card, even if it is more understandable and justified. Tennessee seems to be okay with trading penalties here and there if the speed and tempo of the offense can push the defense back on their heels. Heupel has proven that he can work within that strategy, but too much is inevitably bad.

“That’s a drive killer,” TE Jacob Warren said after the game on Tennessee’s penalties. “You’re marching the ball down the field, and consecutive penalties back to back or just one penalty can really put you behind the chains. It’s tough to bounce back from. So that’s something that we obviously got to clean up.”

Another veteran on the Tennessee team, defensive back Theo Jackson, also spoke about Tennessee’s penalties. For as much as a penalty can kill an offensive drive, it can also extend dead offensive drives for the opposition. And at times on Saturday, Tennessee found that out the hard way.

“Honestly, given how many mistakes we had last week, which was low, this week it was very high,” Jackson said about the defense’s penalties. “It’s not like us at all, so we really just gotta lock-in. Just be more focused on the field and just play.”

The other area that Tennessee lost in, the game within the game, was the turnover battle. As the first game maxim states, “the team that makes the fewest mistakes will win,” and Pittsburgh proved that on Saturday. Tennessee gave the ball up three times throughout the game, and in comparison, Pittsburgh had a clean game with zero turnovers. The Vols’ first fumble was by QB Joe Milton in the second quarter. Milton was rocked by a Pittsburgh defender on a blitz up the middle during a drop-back pass. In addition, Milton did fumble the ball on the play, but more importantly, was injured and did not return to the game.

The timing of the first fumble wasn’t ideal. Pittsburgh had taken the lead with their second straight touchdown to go up 14-13 at the start of the second quarter. Tennessee did respond to the first touchdown with a field goal. However, they never had the chance to respond to the second due to the fumble. Regardless though, the Vols’ second fumble may have been even worse timing. Tennessee chose to defer so their offense could take the field to begin the second half. That outcome was ideal considering Tennessee trailed 27-20 after two quarters of play. However, QB Hendon Hooker fumbled on the opening second-half drive. Luckily for Tennessee, Pittsburgh couldn’t capitalize, but it was still a potential nightmare scenario for the Vols. 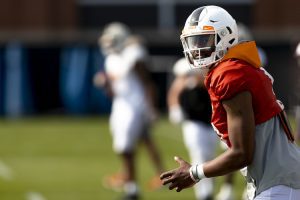 Tennessee trailed by seven points for the game’s final ten minutes. That final stretch saw one turnover on downs from Tennessee and their final drive end with an interception. With just under five minutes remaining in the game, Hooker threw an interception that would seal the deal for the Vols.

The Tennessee offense did not have the chance to return to the field, but they have plenty of lessons to take from the game. Of course, the defense does as well, but the most noticeable opportunity misses on Saturday were from the offense.

If Tennessee is going to be so reliant on their offense to win games in 2021, the team as a whole has to cut back on penalties. And the offense cannot take the ball out of their own hands. In addition, there are plenty of games later in the season that could very well trend the way of Saturday. That means that plenty of Tennessee’s games could be races against the clock to outscore their opponent. Therefore, each possession will be that much more valuable- and that much more critical.

Pittsburgh (2-0) took down Tennessee (1-1) in the Johnny Majors Classic Saturday in Knoxville. In the end, there were several plays and moments that could have changed the game for Tennessee. But it was Tennessee’s number one game maxim that could have made the most significant difference.

“The team that makes the fewest mistakes will win.”