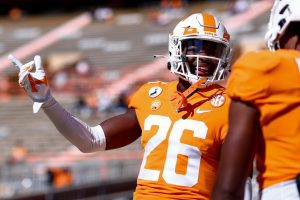 Theo Jackson has seen all the up’s and down’s that have come through the Tennessee program since he arrived in 2017. However, all of that experience proved invaluable last Thursday when Jackson was dominant for the Tennessee defense. Jackson, a senior from Nashville, led Tennessee with 11 total tackles against Bowling Green.

However, the tackling numbers alone don’t do justice to Jackson’s work on Thursday. In total, Bowling Green ran 61 offensive plays against Tennessee. Along with Trevon Flowers and Jaylen McCollough, Jackson saw a team-high 56 defensive snaps in the game. There’s no question that Vols’ defensive coordinator Tim Banks and the coaching staff gave Jackson a big responsibility. And Jackson indeed executed that role against the Falcons.

“We came out and played a good game and we won the game, so [coach Heupel] was giving us props there,” Jackson said after the contest against Bowling Green. “But he told us we have things to work on and we have to get better for next week’s game.”

With all the things that Jackson has seen or gone through during his Tennessee tenure, the senior defensive back doesn’t look to be seeking individual praise in 2021. Instead, after the game on Thursday, Jackson spoke about the defense as a whole, when he could’ve celebrated or boasted about his own achievement.

“We did well, especially in the run game, holding them to 30 yards rushing,” Jackson said after the game. “Passing game, we need to tighten up.”

The Tennessee defense held Bowling Green to just 32 yards on the ground Thursday. The Falcons’ 1.4 average yards per rush resulted from Tennessee’s overpowering rush defense on all levels. The defensive line did what they were supposed to do and created havoc upfront, but Jackson was one of the main reasons Bowling Green only had one run more than ten yards. 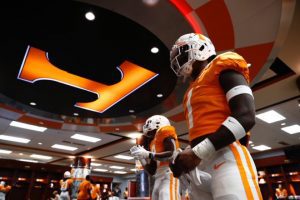 After the game, Jackson specifically gave credit to the defensive line and explained how they work in tandem.

“I love it,” Jackson said about the Vols’ defensive line pressure on Thursday night. “The D-line, DBs, they go hand-in-hand. We have good coverage, then they get a coverage sack. If they have pressure, we get all the bad balls, tips, and overthrows.”

Even with all the positive takeaways from the Tennessee defense, Jackson did mention that he felt like their pass defense could be improved still. Bowling Green didn’t dominate the air by any stretch of the imagination with 187 yards, but it was the primary source of their offense. The passing game accounted for 85 percent of the Falcons’ offense against Tennessee.

But still, Jackson was pleased with the effort from his defensive teammates in the season opener. Thanks to Tennessee’s up-tempo offense, though, the Vols’ defense was on the field more than the offensive unit. However, that didn’t seem to be a problem for Tennessee STAR DB Theo Jackson. The senior uses his experience to carry him through the games.

“I am very comfortable because this defense is similar to last year’s, but it’s much simpler,” Jackson said on Thursday night. “So now, I can just get the call and worry about what the offense is going to run. It made me calmer and have more trust in the process and the preparation I put in.”

In hindsight, the calmer mindset and the extra preparation helped lead Jackson to be Tennessee’s top tackler on Thursday. In the debut of the Heupel Era at Tennessee, Jackson was also a captain at the start of the game. Although, he jokingly talked about how it made him miss one of his favorite Tennessee traditions.

“I am sad that I did not get to (run through the T) because I was a captain, but we will see next week,” Jackson said. “It is always a blessing to run through the T. It is one of the best traditions in college football, and I will always cherish it.”

Tennessee will be back in Neyland Stadium this Saturday at noon ET. The Vols will take on Pittsburgh on ESPN in the Johnny Majors Classic.