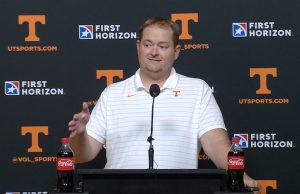 Heupel hit a number of different topics ranging from player updates to game film impressions. The Tennessee head coach did touch on the Vols’ quarterback situation, along with the current status of both Joe Milton and Hendon Hooker. Heupel also spoke about things he saw, both good and bad, on the game film that he will address this week during Tennessee’s practices.

Tennessee head coach Josh Heupel did announce the debut of a key Tennessee defender for this Saturday. In addition, Heupel spoke some about the early preparation process for the Vols game against Tennessee Tech on Saturday.

One of the surprise events of Saturday was the loss of Jabari Small midway through the game. Entering the second half, Tennessee did not have either of their 100-yard-rushers from week one. That left the weight on the shoulders of freshman running back Jaylen Wright, who Heupel did find impressive during the game.

“[Wright] had to carry the bulk of it during the second half,” Heupel said on Monday. “As a young player, he’s going to continue to get better every single week. He did some solid things in the protection game. At times, he ran extremely well with his aiming points and being able to deliver. He’s got to continue to work on getting lower at the point of impact and finding a way to get plus-two at the end of his runs. But he is a young guy that everyone in our program feels really good about.”

The full week three Monday press conference from Tennessee HC Josh Heupel can be found below. In addition, a few of Tennessee’s players also spoke to the media to kick off the week Monday.