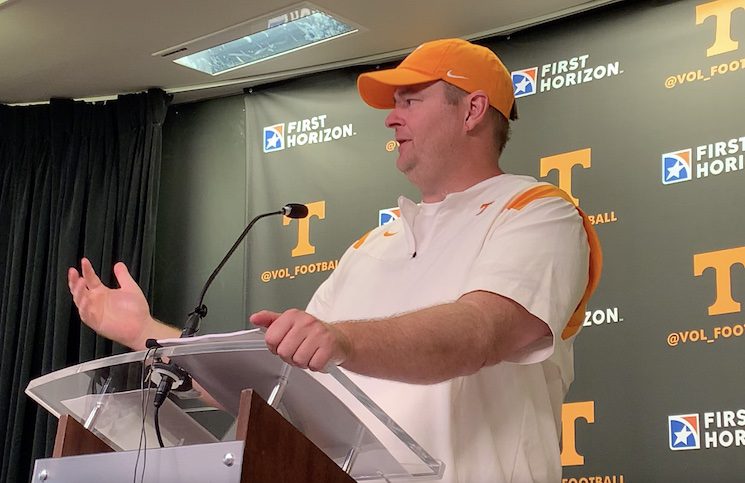 Heupel opening statement: I’m excited about what our guys have done here this week since getting back in the building. I said it after the ball game, everybody was disappointed with the outcome of the game. As the coaching staff, we loved the energy and effort that we played with but we’ve just got to be a lot smarter football team. I said after the game that we’ll find out a lot about our football team by the way they approach coming back into the building on Monday and the last three days— we just finished up our Wednesday practice— guys have been great. Really focused and excited about getting another opportunity to compete but we’ve taken ownership, players and coaches together, are taking ownership about the things that we can control and the things that we can get better at. We’ve had great energy out on the practice field. We’re excited to have another opportunity to go inside Neyland Stadium this Saturday. Excited to continue to journey with these guys. I know they’re ready to play.”

Question: Hooker and Bailey were listed as your number two quarterback coming into the season. Was Hooker your number two regardless of the situation or has he just made the most sense in the instances he’s played?

Heupel: “Our staff and players have great confidence in both of those guys. Hendon, where we were over the course of the week in practice and what we were doing offensively it felt like it was the right time for him to be the guy to go in the football game. You all have heard me say it before, the strength of one position can never be one guy and all those guys have had a really good week of practice here.”

Q: What do you like about Harrison Bailey’s game? Where would you like to see him improve?

Heupel: “Harrison is smart, competitive, plays for his teammates and pushes them in a positive way. He’s a good leader inside of our team. He’s on our leadership council. He prepares the right way too.”

Q: How has football changed to where it’s not a bad thing for a defensive back to lead a team in tackles? How has Theo Jackson been able to do that on this team?

Heupel: “The game is played in more space, safeties are playing closer to the box, some of them are closer on some of the perimeter screen game so those guys are going to have to tackle and tackle in space. When you look at Theo, he is playing close to the football and that’s why you can see his numbers are as high as they are because he’s doing a great job of playing at the position he is playing. For us as a staff, from the time I got here at the end of January, that first team meeting, he has just been the model of consistency, man. Veteran guy, he’s extremely mature on and off the field. He’s mature in the way he’s prepared and approaches every day on the grass or in the meeting room. Players have great confidence in him. He’s a guy that’s starting to play at the level he is because of the work he’s putting into it. If you pay the price and put the work in, good things will eventually come to you and I’m really excited about what he’s done the last couple weeks.”

Q: How would you assess the running of Hooker and Milton to this point and how do you balance incorporating more quarterback runs with the inherent risk that comes with it?

Heupel: I think you have to be smart. You have to be opportunistic. Situational football, there’s times where you have to play 11 on 11 and you’ve got to be apart of the quarterback run game. You try to do it in a way where you’re limiting their exposure and they’re hopefully out in space where they have a chance to protect themselves and get down. For us, both of those guys have done a good job when the balls been in their hands as a runner. Obviously, the turnovers there with the ball in their hands, a couple of those inside the pocket, are things we’ve got to continue to clean up. For us, that dimension has helped us out in the first couple weeks.

Q: Have you decided on a starting quarterback for this weekend?

Heupel: We do not have a starter yet.

Heupel: He was out on the practice field today. I don’t know if he’ll be available on Saturday. Some of those guys that were nicked up after the ball game are guys that are going to continue to progress through the week and we’ll see where we’re at when we get closer to kick off.

Q: What are your expectations for Byron Young in his first game?

Heupel: To play at a championship level. He’s been really consistent in his effort and technique playing on the edge for us over the course of training camp. Missed him in a big way the first couple weeks. I’m excited for him to get on the field to go compete. I expect him to be able to apply pressure on the quarterback and to do a good job in the run game too.

Q: Was Jacksonville State beating Florida State brought up to your team with Tennessee Tech coming in?

Heupel: Really the message for us this week, and it’s true every week, you prepare for what your opponent does, but your preparation and process has got to be right and that leads you to kick off and let’s you handle the things that are inevitably going to come up during a ball game the right way, to give yourself a chance to win. A lot of teaching moment for us during the last ball game that we were able to point out during position meetings, during unit meetings and during team meetings. At the end of our team meetings on Mondays we always show clips of not smart football plays from across the country and just how you finish ball games and how you handle positive and negative situations. That situation that came up at the end of the Jacksonville State ball game is something we showed. This week for us, is about us and getting one week better and competing extremely hard on the practice field and learning what it looks like to be a championship caliber program. We have a long way to go but I really am— our guys have been awesome in the building. They’ve been really focused on what I think are the right things to lead us to kick off  and to play the way that we’re capable of. I’m proud of what we’ve done this week but we really need to finish it off, Thursday, Friday have to be big for us for the way we lead up to kick off.

Q: How would you evaluate your offensive line through two weeks?

Heupel: “Some positives but not consistent enough in those things. There’s more yards out there in the run game. We can do better in our pass protection. There’s some critical situations that we need to handle, communicate, take adjustments from the sideline and incorporate it into the next drive or into a situation that comes up a quarter later, to handle those things the right way and play cleaner. I do like the effort they’re playing with. They’re trying to strain, they’re trying to move and change the line of scrimmage. You’ve seen us do that at a really good clip at times. We’re on the journey right now of becoming as good as we can. They’re continuing to take ownership of what they can continue to improve.

Heupel: Both of those guys we don’t have a final word on yet. Our hope is that those guys will be able to play but we’ll find out as we get towards the end of the week.

Q: What opportunities would those two missing time present the other running backs on the roster?

Heupel: Obviously, those guys are getting a ton of work this week on the practice field as they have been. When one guy goes down the next guy has to step up and play at an elite level. It’s certainly an opportunity for all of those guys to practice well, to prepare well and then have an opportunity tpo go out and play well on Saturday too.