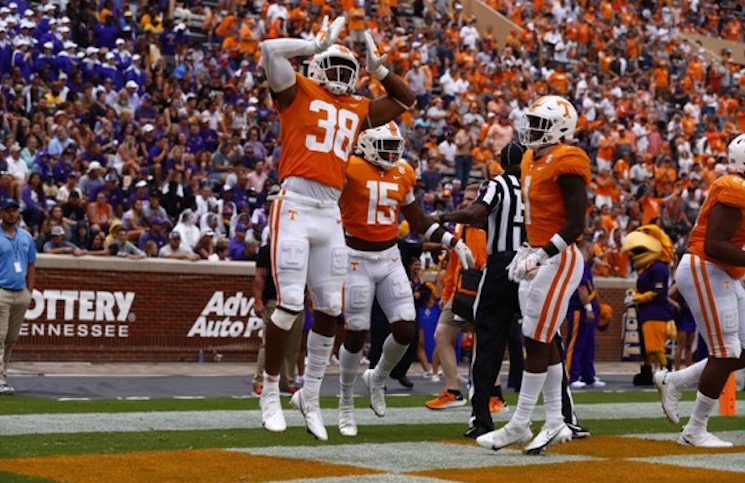 Tennessee bounced back from its first loss of the Josh Heupel era, blowing out a bad Tennessee Tech team at Neyland Stadium, 56-0.

Here are four quick takeaways from the win.

With Joe Milton unavailable, Hendon Hooker made his first Tennessee start and Harrison Bailey saw his first action of the season.

While Bailey played, it was not in alternating fashion with Hooker earning every snap in the first half. Hooker was mediocre in his second appearance with the Vols, completing 17-of-25 passes for 199 yards and three touchdowns.

Hooker showed his running ability again this week, totaling 64 yards on nine carries. 55 of those yards came in the first half, including a 22-yard run that set up Tennessee’s second touchdown.

Still, the Virginia Tech quarterback was far from perfect, struggling to complete passes down the field and missing an easy out route to Princeton Fant on fourth-and-two.

Bailey made his season debut late in the third quarter. Playing with mostly back ups and third stringers, the sophomore completed three-of-seven passes for 16 yards. Bailey added eight yards on the ground and capped off his lone touchdown drive with a two-yard keeper.

The former five-star recruit wasn’t bad in his debut, but didn’t do anything to prove he should earn more snaps moving forward.

Tennessee finally completed a vertical pass down the sideline Saturday as Hooker found JaVonta Payton for a 29-yard touchdown.

The Vols offense wouldn’t convert on many of those opportunities though as missed passes down the field continued to plague Tennessee’s offense.

Payton dropped a beautiful deep ball from Hooker on the first drive of the game and Hooker overthrew him on a go route a play later.

Hooker would also fail to complete passes down the field to Cedric Tillman and Jalin Hyatt— though the underthrown pass to Hyatt led to a pass interference.

For the first time all season, Tennessee won the turnover battle but it wasn’t without coughing the ball up. Hooker fumbled on a quarterback run. Tennessee Tech’s Cameron Hudson recovered, returning it to the Tennessee 30-yard line.

If it weren’t for a great tackle by Cade Mays, Hudson may have scored on the play.

Throwing the ball vertically down the sideline is a huge part of Heupel’s offense. The Vols’ struggled with it the first two weeks and Saturday presented an easy opportunity to hit a few and gain confidence heading into next week’s game with Florida.

The Vols failed to capitalize on that chance Saturday and will have to find their rhythm in SEC play.

Despite missing four major contributors due to injury, Tennessee’s defense did what it was supposed to do, shutting down a bad Golden Eagles offense.

Tennessee Tech didn’t record a first down until its third drive of the game and only reached Tennessee’s side of the field after a Hooker fumble in the first half.

Tennessee’s defense forced its first four turnovers of the season in Saturday’s win thanks to interceptions from Jaylen McCollough, Alontae Taylor , Solon Page III and Tamarion McDonald. Page returned his interception 30 yards for a touchdown, marking the Vols’ first non offensive touchdown of the season.

The back end of the Vols defense benefitted from the play of its defensive line. Rodney Garner’s group overwhelmed Tennessee Tech’s offensive line and lived in the Golden Eagles’ backfield.

In total, Tennessee Tech’s offense recorded just 179 yards, 144 coming through the air and 35 coming on the ground.

Tennessee forced its first shutout since beating UTC 45-0 in 2019.

Making his season debut, Byron Young recorded five tackles but no sacks or tackles for loss.

The first two weeks made it clear that Josh Heupel and offensive coordinator Alex Golesh want to target their tight ends more and that continued in Saturday’s blowout win.

The Vols have used the two veteran tight ends in a plethora of short yardage situations to the sidelines as well as using them over the middle on seam routes.

Warren has made himself particularly valuable in the red zone where he has touchdown catches on back-to-back weeks. In fact, Warren is the only Tennessee pass catcher with a touchdown in the red zone this season.

Touchdown receptions from Cedric Tillman, Jimmy Calloway and JaVonta Payton came outside of the 20-yard line.