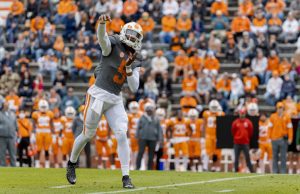 It looks like Tennessee quarterback Hendon Hooker will be receiving the starting nod for the Volunteers on Saturday against Tennessee Tech. Before the game, Vols’ QB Joe Milton III, the starter in the first two games for Tennessee, was ruled inactive for the game.

Milton was taken out of the game against Pittsburgh early in the second quarter after an injury. Tennessee head coach Josh Heupel was vague in his responses regarding Milton’s health all week. However, on Saturday, the announcement came down that Milton would not be active.

After Milton’s injury against Pittsburgh, Hooker came into the game and played well. Hooker went 15-of-21 for 188 yards. He also added in two touchdown scores but did throw an interception on Tennessee’s final drive of the game.

Hooker also showed his ability to be dynamic in the run game against Pittsburgh. The former transfer quarterback ran for 49 yards on nine attempts last Saturday.

The other notable quarterback on Tennessee’s roster is Harrison Bailey. The sophomore quarterback has not seen action in any of Tennessee’s games this year. However, with Milton injured and the SEC opener next week against Florida, the expectation is that Bailey could see his first game action of 2021 on Saturday.

Tennessee QB Joe Milton is inactive for Tennessee’s game against Tennessee Tech. Therefore, Hendon Hooker will be getting the starting nod in week three.