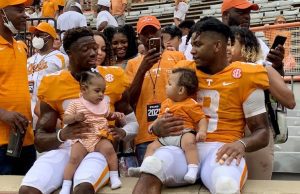 Walking around the field after Tennessee’s victory over Tennessee Tech on Saturday,  it was hard to see someone wearing orange that didn’t have a smile on their face. Tennessee took down Tennessee Tech, 56-0, to close out their three-game home stretch to begin the year.

The Tennessee players know very well that starting next weekend, they leave their Knoxville bubble for the first time since fall camp began in August. Tennessee will travel to Gainesville to take on Florida at night. But on Saturday afternoon, the players didn’t seem to be thinking about Florida or the SEC after the game. Instead, the majority of the team was either split between the student section or the family section, enjoying the last few minutes of game day.

As a good amount of the Tennessee players started filing into the locker room, two players remain perched on the field wall. Tennessee RB Tiyon Evans and DB Brandon Turnage were surrounded by their friends and family as they briefly spoke about the game. However, it was Turnage and Evans’ children, that stole the show – and the attention of every nearby photographer. 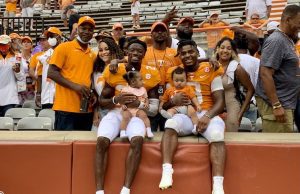 On Saturday evening, Turnage replied to the picture on Twitter, which was posted by Jake Nichols of VR2 on SI.

On June 20, Father’s Day, Evans posted a picture of him and his son on Twitter.

“Happy Father’s Day from me and my little Vol to all the fathers out there that’s being the best image they can for their kids,” Evans said on Twitter. “#VFL #FathersDay #GBO”

Happy Fathers Day from me and my little Vol to all the fathers out there that’s being the best image the can for their kids🤞🏾 #VFL #FathersDay #GBO pic.twitter.com/uJE6u8b0CW

Both Tiyon Evans and Brandon Turnage are playing their first season in a Tennessee uniform, too. Evans was a junior college transfer from Hutchinson Community College, the same JUCO program as former Tennessee greats Alvin Kamara and Cordarelle Patterson. In addition, Turnage came from Alabama. The Oxford, MS native spent two years in Tuscaloosa, from 2019 to 2020 before heading over to Knoxville.

While Evans and Turnage may not have a significant amount of collective time between them in Neyland Stadium, they look right at home while posing with their children and family after a 56-0 win. 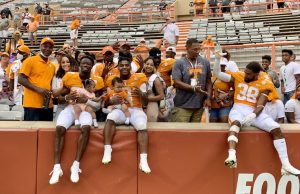