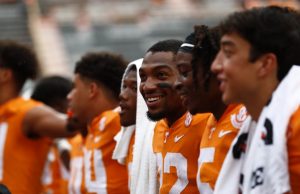 The Tennessee defense didn’t have a turnover through their first two games of the Josh Heupel era. Not to say that it was concerning, but it was a little surprising. However, all week before the Tennessee Tech game, the Volunteer players knew that it was only a matter of time before the tide turned their way. In fact, defensive backs coach Willie Martinez made it an emphasis in practice this week.

While the game went the way almost everyone expected, it was still a hard-fought win from Tennessee. The Volunteers (2-1) defeated Tennessee Tech (0-3) by a score of 56-0 in Neyland Stadium.

No, Tennessee did not have a dominant defensive performance against a top-tier offense. In reality, Tennessee Tech will likely have one of the worst offenses in all of college football by the end of the year. But sometimes, to use a basketball analogy, you don’t always need to make a game-winning buzzer-beater to find your stride. Sometimes, all it takes is one make. On Saturday in Knoxville, Tennessee’s defense didn’t have a game-winning half-court shot. Instead, they worked on their fundamentals and gained confidence in every department. And after the season’s first loss the week before, combined with a matchup against Florida next week, having a dominant game to build confidence may have been the best thing for the team in the long run.

The first turnover of the Volunteers’ season came when Jaylen McCollough found his first career interception. With just over six minutes remaining in the first quarter, Tennessee Tech quarterback Willie Miller threw a pass that McCollough brought down. It was a big moment for Tennessee. Not because they needed the offensive possession, but because they could finally throw that turnover-less monkey off their back.

“All week, Coach (Tim) Banks and Coach (Willie) Martinez were persistent on wanting us to get turnovers and make plays on the ball,” McCollough said after the game. “That was our main focus coming into the game today, and we executed by playing hard and fast, and it showed.”

The four interceptions that Tennessee brought down on the day did not go to waste, either. The Vols offense was able to capitalize to the tune of 27 points off those turnovers. Three of the four, however, did come in the second half. To begin the third quarter, Tennessee Tech drove the ball down the field throughout nine plays. However, the tenth did spell out trouble for the Golden Eagles. Tennessee defensive back Alontae Taylor made a tremendous jump on a ball, by the sidelines, and had nothing but green in front of him. Tennessee would have had a score if Taylor had not taken a step out of bounds during his sprint to the endzone. Regardless though, it was still a great play from a Tennessee veteran.

Tennessee’s offense did score on the drive following Taylor’s interception. However, on the Golden Eagles’ first play with the ball back, Tennessee Tech again threw an interception to the Tennessee defense. However, this time, LB Solon Page III returned the ball to the house for six points. In addition, the pick-six was Page’s first career interception.

“Off the interception, I was thinking what every football player thinks, ‘make a play,'” Page said after the game. “Once the ball came out of the quarterback’s hands, and I saw it up in the air, I thought I had to go get it. Once I had it in my hands, it was just muscle memory at that point. I went down there and made the touchdown.”

And finally, on Tennessee Tech’s first drive of the fourth quarter, Tennessee once again took the ball away and gave it to their offense. However, this time it was defensive back Tamarion McDonald who came up with the play for Tennessee, cementing the Vols brilliant day in the turnover department. And just like McCollough and Page, McDonald caught his first career interception on the day.

“I thought the team did a lot of the things we were asking them from the previous week, but still played with great effort and energy,” Tennessee head coach Josh Heupel said after the game on Saturday. “In particular, the defense and special teams. I thought we played cleaner, way fewer penalties. I thought we handled that the right way. Then, we were able to take care of the football for the most part during the football game and defensively were able to force four. Did a great job there. I thought we took some positive steps.”

If the Tennessee defense did gain any confidence against Tennessee Tech, they will need it next week. Next Saturday night, the Vols will open up SEC play with a road trip at night to The Swamp to take on SEC East rival Florida.