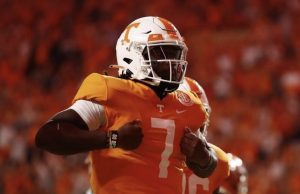 For the second straight week, the most significant topic surrounding Tennessee football remains its biggest mystery.

The Tennessee Volunteers are gearing up for their first SEC game of the year this Saturday night. However, just like last week, Tennessee’s starting quarterback remains a mystery heading into Florida. Joe Milton III and Hendon Hooker have seen the most game time since the season began. But after sustaining an injury in week two, Milton’s status and health have been vague, to say the least.

On Monday, Tennessee head coach Josh Heupel spoke about Milton’s status and if he would be his starting quarterback against Florida if healthy.

“I never speak in hypotheticals,” Heupel said on naming a starter before knowing all the information. “(Joe Milton III) got a little bit of work last week. We’ll find out where he is, in particular, Tuesday or Wednesday here, and see where we are at that point, as far as whether he’ll be able to play or not.”

Hooker made his first start in week three, while Milton did not dress out for the game, indicating that his injury was still severe enough to hold him from the game last Saturday. However, heading into the game against Tennessee Tech, Milton was the No. 1 quarterback on the depth chart all week.

Similarly, on Monday, Milton was the starting quarterback on the Tennessee depth chart heading into the Florida game.

While not something to be dismissed early into the season, it does seem like the depth chart, in specific cases, isn’t to be taken as definitive. For example, in the case of the quarterbacks, several variables will factor in over the week. And, regardless of the information that he does have available, Heupel has shown that he prefers to hold his cards close to his chest during game week.

However, something to consider could be how weekly strategy factors into something like naming a starting quarterback. While Milton and Hooker are not drastically different quarterbacks, Heupel may try to find an advantage against Florida HC Dan Mullen by not revealing his starter until game day.

After the Vols’ win over Tennessee Tech, Heupel gave his thoughts on Hooker’s performance against the Golden Eagles.

“Some real positives,” the Tennessee head coach said about his quarterback. “(He was) decisive, accurate at times, did a good job using his feet at times, but the turnovers can’t happen. There were some plays in the passing game from in the pocket with wide receivers behind the secondary and not connecting on those. You have to, at some point, make those plays.”

Meanwhile, Heupel also spoke about Milton’s status during the week leading up to the Tennessee Tech game.

“He had some opportunity to work with us during the middle part of the week,” Heupel said. “At the end of the week, he just did not feel like he was going to be ready. So I think the next couple of days will be big in his rehab, and we will see where he is at when we get on the field on Tuesday.”

If Milton winds up healthy for week four and Heupel returns to him as his starter, it will be Milton’s first action since Sept. 11. Through the first two weeks of the season, before his injury, Milton had a completion percentage of 51 percent, going 18-for-35 for 189 yards. Milton has not thrown an interception while also throwing his first and only touchdown in week one.

Hendon Hooker, the only quarterback to play in all three of Tennessee’s games, has been the best through the air of the three (Milton, Hooker, Harrison Bailey). Hooker is 33-for-47, with a completion percentage of 70 percent. In addition, Hooker has thrown for 392 yards, five touchdowns, and one interception.

Meanwhile, Milton and Hooker have been almost identical on the ground. Milton has 19 carries compared to Hooker’s 18, with 129 yards compared to 137 yards from Hooker. In addition, the former transfer from Michigan, Joe Milton, has found the endzone twice while Hooker has one score on the ground.

With all the variables at play, it’s hard to gauge where Tennessee will go with their starting quarterback this weekend. If the most straightforward answer is believed with the depth chart, Milton will be Tennessee’s starting quarterback if healthy. However, it does seem to be a little more complicated than just that. While there’s no way to tell based on Heupel’s comments, Hooker could have played his way into the starting lineup during Milton’s absence, regardless of injury.

Heupel’s next media appearance will be Wednesday, Sept. 22, during the SEC head coaches teleconference. Then, Heupel will answer questions for the Knoxville media on campus Thursday morning for his final availability.

On Monday, Josh Heupel wasn’t willing to reveal much into his plans for his signal-caller this Saturday night in Gainesville. Therefore, heading into the middle of Florida week, the starting quarterback for Tennessee remains a mystery.