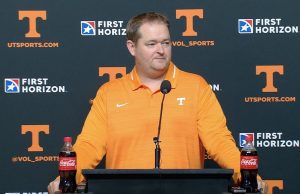 The Tennessee football team is officially heading into its fourth week of competition with two wins and one loss. However, after three non-conference games began the season, the Vols will travel to The Swamp to take on Florida in primetime.

To begin the week, Tennessee head coach Josh Heupel had his usual Monday morning press conference. During this, he talked about several topics, ranging from his closing thoughts on week three to his upcoming feelings towards Florida.

After winning their opening contest against Bowling Green, Tennessee took a loss in a hard-fought contest to Pittsburgh. However, Tennessee did rebound in a 56-0 win over Tennessee Tech in week three.

This will be Josh Heupel’s first time playing Florida with Tennessee, but going back to the state will be a sort of homecoming for Heupel. The current Tennessee coach was the head coach of UCF for three years before transitioning to Tennessee. However, Heupel is already familiar with the importance of the Tennessee/Florida game in Knoxville.

“This is a big game,” Heupel said. “During the course of the summer I showed them highlights from these types of games, a couple of them were Florida games, highly competitive games. I think our kids understand and are excited about this game. It means something to them. The challenge for us is you don’t have to do something extraordinary, you’ve just got to do the ordinary at a really high level. Your process and your preparation has got to get you to kick off and that’s what we’ve been stressing to our bunch.”

Below is the full video for Tennessee HC Josh Heupel during his Monday morning press conference. In addition, you can also find a full transcript of the press conference here.