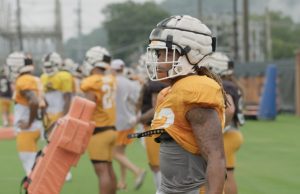 After three straight weeks of home-cooking in Knoxville to begin the season, Tennessee will hit the road for the first time in the Josh Heupel era this weekend. The Volunteers will begin their SEC schedule with a trip to take on Florida, under the lights, in The Swamp.

But the Tennessee Volunteers aren’t jumping ahead to Saturday early. Instead, they are taking the week one day at a time.

On Tuesday morning, the Tennessee football team was back on the practice field. In addition, there are already several fascinating storylines surrounding the team as they make their way through the fourth week of the season.

The starting quarterback for Tennessee remains a mystery heading into week four, just like it did in week three. Meanwhile, the Vols haven’t had their top two running backs for an entire game since week one. In reality, the injuries have been one of the most significant obstacles the Vols have had to overcome so far.

Tennessee has had to deal with a number of injuries in the last few weeks. Both of the Vols’ running backs, Tiyon Evans and Jabari Small have missed at least one game this season. Offensive lineman Cooper Mays was also injured early in the season and has not seen a return to the field. Meanwhile, his brother Cade, along with offensive lineman Kingston Harris, both had to leave week three early due to injury. And that’s not even mentioning Heupel’s starting quarterback for the first two weeks, Joe Milton III, has not seen action since sustaining an injury in week two.

Regardless, though, the Volunteers are optimistic about what could be in store this weekend. As the Tennessee players continue running through practice this week, they will look to get healthy and clean up their final mistakes before the weekend.

After practice, Tennessee defensive line coach Rodney Garney spoke to the media about the Vols’ week. In addition, DL Ja’Quain Blakely, WR Walker Merrill, and DE Byron Young all met with the media as well.