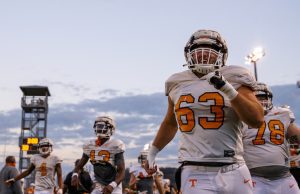 Tennessee hasn’t just squared off against Bowling Green, Pittsburgh, and Tennessee Tech through the first three weeks of the season. In addition, one of Tennessee’s most grueling opponents so far has been the injury bug, specifically on offense. The Vols have dealt with their injuries well, though, and it has even given players a chance to rotate into the game.

Josh Heupel, Tennessee’s head coach, did announce that his team took a significant step closer to full health on Thursday. However, Heupel also said that a few other key starters are still under evaluation.

“I anticipate Cooper [Mays] being back with us and Jerome [Carvin] sliding back over [to left guard],” Heupel said during his final press conference before Florida on Thursday.

Mays, Tennessee’s starting center to open the season, left the game with an injury and has not returned to the field since. In his absence, Carvin has slid over to hold down the center position.

Carvin, who was not expecting to switch positions on the line during the first game, has done well in Mays’ absence. However, Tennessee will undoubtedly benefit from getting their offensive back to full strength. 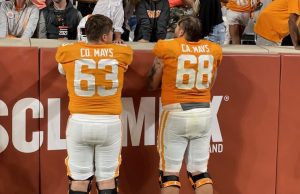 In addition, Heupel also spoke about linebacker Juwan Mitchell. The former transfer from Texas was a starter in both of Tennessee’s first two games. However, Mitchell did not play in week three due to an injury.

Heupel said that Mitchell has been “on the grass a little bit” this week. However, his final evaluation would come closer to game day.

Florida currently has the second-ranked rushing offense in the country, averaging 336 yards on the ground per game. However, Florida hasn’t been padding their stats against bad teams, either. In week three, Florida lost to Alabama at home by a score of 31-29.

Heupel’s only other note on the injury front was on his quarterbacks, specifically Joe Milton III. In addition, Heupel didn’t even wait around for the question to come to him. Instead, he made his opening statement crystal clear, with the same message given all week.

Heupel said that he had no update on Milton’s status heading into Florida. And also that Milton would receive further evaluation closer to game day. This is the same route that Heupel went last Thursday in regards to Milton’s health. Two days later, Milton did not suit up for the Vols’ game against Tennessee Tech.

The Tennessee Volunteers (2-1) will travel to The Swamp to take on Florida (2-1) this upcoming weekend. The game will take place at 7:00 p.m. ET on Saturday, and ESPN will have the broadcast.