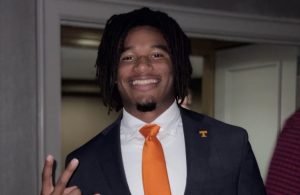 Many Tennessee athletes have been all over the city this fall, representing different businesses, companies, and organizations. Which, has only been possible after the NCAA’s NIL deal was set in motion this past summer. Many athletes have found local restaurants, clothing brands, and other various businesses to put their names in front of. However, there have also been some very touching stories to come out of the NIL world. And one of the most heart-warming connections comes from Tennessee wide receiver Velus Jones Jr.

Jones Jr. made the announcement on Tuesday that he will be partnering up with the Down Syndrome Awareness Group of East Tennessee.

Proud to announce my partnership with the Down Syndrome Awareness Group of East Tennessee!

One owner of my NFT card will be selected to win signed game worn cleats!

Part of the proceeds of my merchandise and NFTs will go to @DSAG_TN.

The year 2021 didn’t just see the rise of NIL deals in college athletics. In addition, the world was also introduced to NFT’s on a large scale. And Jones Jr. has found an impactful way to combine both things.

Portions of the money that is spent on Jones’ NFT and the subsequent raffle will be donated to the Down Syndrome Awareness Group of East Tennessee.

Through three games into the Tennessee season, Velus Jones Jr. is still trying to find his stride. An injury during fall camp did cause a setback, but the veteran wide receiver has gotten better each week.

“Velus is a guy that (we) really liked what he did through spring ball and had a really good summer,” Tennessee HC Josh Heupel said last Thursday. “He got nicked up early in training camp and missed a lot of time. He’s coming back into the fold. As he continues to get healthy and continues to grow in some of the subtleties of how we operate. (We) want him to continue to grow and take more ownership in what we’re doing as we trust him more and more. You’ve seen his impact offensively, but on special teams as well, need him to continue to grow quickly.”

In the Vols’ season opener, Jones Jr. did not have a reception in the game. However, he has found three in each of the past two weeks. Against Pittsburgh in week two, Jones Jr. had 31 receiving yards. Then, one week later, he brought that up to 65 yards and even took in a touchdown score against Tennessee Tech. However, it has been as a kick/punt returner that Jones Jr. has really shown to be an x-factor for Tennessee.

The Tennessee Volunteers (2-1) will travel to The Swamp to take on Florida (2-1) this upcoming weekend. The game will take place at 7:00 p.m. ET on Saturday, and ESPN will have the broadcast.