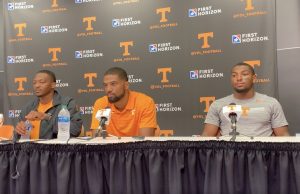 The Tennessee Volunteers came into Saturday 6-0 against Tennessee Tech in their program’s combined history. In four of their last six meetings, Tennessee Tech was held scoreless. And in all of those meetings, the Volunteer scored more than 36 points.

The 2021 Tennessee squad can add their name under both categories after Saturday’s game. And afterward, some of the Tennessee players shared their reactions with the media.

Tennessee (2-1) took down Tennessee Tech (0-3) on Saturday afternoon in Neyland Stadium 56-0. While it was not a game that was expected to be a challenge for the Vols, the game’s timing was ultimately beneficial. Tennessee needed a refresh after suffering their first loss in week two. In addition, the team gets a dominant win before they open up SEC play against Florida next Saturday night. So a bad Golden Eagles team came to Knoxville in the perfect spot. Tennessee had their easiest test of the season to date between a loss and a road matchup with a Top 15 division rival.

The defense stole the show on Saturday for Tennessee. After two consecutive games to start the season without a turnover, the Vols went into overdrive in that department on Saturday. Tennessee had four interceptions against three different quarterbacks in the game. In addition, one was returned for a touchdown by LB Solon Page III.

Some of the Tennessee players including Page, DB Jaylen McCollough, QB Hendon Hooker, and WR Velus Jones Jr., spoke to the media after the game. The players talked about their Saturday opponent as well as their own play.

In addition, Tennessee head coach Josh Heupel also spoke to the media after Saturday’s game. The full video for coach Heupel can be found here. In addition, a full transcript of Heupel’s press conference is here.