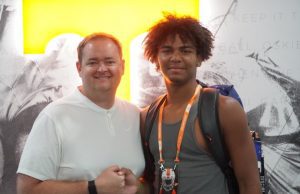 The Tennessee Volunteers are one of five SEC teams that have made the Top 10 for Ethan Davis, a talented four-star pass catcher.

Davis, a member of the class of 2023, is a dual-sport athlete from Georgia. Aside from football, Davis is a talented basketball player who has brought in power five offers in both sports. That isn’t the only dual-aspect Davis has about him, though. He ranks as both a tight end and a wide receiver, according to different recruiting services.

According to 247 Sports Composite, Davis is a four-star tight end prospect and the 15th ranked tight end in the country. As far as Georgia goes, Davis is the 23rd overall player in the state.

However, his Rivals recruiting profile, linked to Davis’ biography on Twitter, lists him as a wide receiver. Rivals also has Davis as a four-star recruit. The service ranks him as the 24th player wide receiver recruit in the nation and the 21st overall player in Georgia.

Currently, the Collins Hill High School athlete has a collection of 15 Division-1 scholarship offers. Davis burst onto the scene in the spring, receiving his first nine offers over the span of four days. From May 24 to 27, Davis took in offers from LSU, Kentucky, Georgia Tech, Ole Miss, Texas, Florida, Texas A&M, Tennessee, and Auburn.

Davis took a trip up to Tennessee to see the Josh Heupel era in person back in June, with the program about a month and a half from fall camp. Davis was in Knoxville on June 13, landing in between trips to Penn State (before) and Ole Miss (after).

The now-junior did play football during his freshman year in 2019, but skipped out on his sophomore season to focus on basketball. However, during that season in 2020, the football team made an offensive scheme change away from the previous Wing-T system. As a result, by the time the season was over, as Collins Hill assistant coach Todd Wofford told SI back in May, the offense “broke about every record there was” last season.

Ethan Davis, a target for Tennessee football, eventually couldn’t resist the urge to join the electric offense. Considering Collins Hill was fresh off a trip to the Georgia 7A State Championship game, Davis knew that football could once again be a viable option for him.

Davis stands at 6-foot-5 with a weight of 200-pounds, according to 247 Sports. His frame has been a significant factor in his basketball success as well. Davis has six scholarship offers on the court, which he received before he burst onto the football scene. His basketball offer list includes Georgia, Georgia Tech, Ole Miss, Middle Tennessee, Kennesaw State, and Tennessee State. 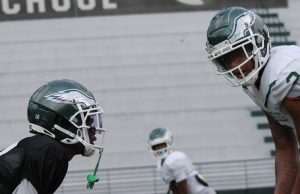 As for which sport he prefers, it sounds like it depends on which one Davis is playing at the time. However, since receiving all of his football offers and dropping his official recruiting list, it seems like Davis is trending in the direction of college football.

Currently, Tennessee does have one commit to their class of 2023. That would be Jack “White Lightning” Lutrell, who got the ball rolling for Vols’ head coach Josh Heupel back in July.

On Sunday afternoon, Georgia prospect Ethan Davis officially gave out his Top 10 finalists, including the Tennessee Volunteers. Davis is a four-star dual-sport athlete and a tight end/wide receiver in the 2023 class.