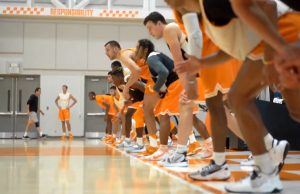 Highlights and footage from the Tennessee Basketball practice on Sept. 28.

With football in full swing, the basketball season around the corner, and the baseball season on the horizon, the sports landscape of Knoxville is hitting it’s yearly routine peak.

Tennessee basketball hit the practice court for the first time on Tuesday. And, they did so with a significant amount of new faces. Tennessee will have eight new players on the court this year, and even two new assistant coaches.

On Wednesday, the Tennessee basketball social media account put out an electric new video with almost a full minute of highlights from the Vols’ practice.

In addition, Tennessee put out a solo highlight from Auburn transfer Justin Powell on Tuesday.

Tennessee will have a much different look than last year after players such as Keon Johnson, Jaden Springer, and Yves Pons all left for the NBA. However, there are some players like John Fulkerson and Santiago Vescovi, who will be returning veterans leading the new players.

Speaking of the new additions to the team, there are a lot of them. Tennessee has brought in five-stars Kennedy Chandler and Brandon Huntley-Hatfield, four-stars Jonas Aidoo and Jahmai Mashack, and three-stars Quentin Diboundje, Zakai Zeigler, and Handje Tamba. Not to mention, Powell (shown above) also will begin his first season with Tennessee after spending one year at Auburn in 2020.

The players won’t be the only new faces in the building, though. Tennessee head coach Rick Barnes has brought in Rod Clark and Justin Gainey as the team’s new assistant coaches. Clark, a rising star in the basketball world at only 28 years old, is going into his third season as an assistant coach. In the 2020 season, Clark was an assistant with Austin Peay. Gainey, on the other hand, is “a proven veteran with previous coaching experience in the ACC, Pac-12, Big East and beyond,” according to UT Sports.