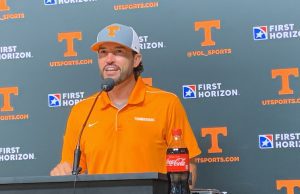 The Tennessee Volunteers baseball team was the shock of the spring in 2021. In the midst of captivating an entire city and fanbase, the Vols made it to Omaha for the postseason tournament for the first time in 16 years. However, the majority of the build to Omaha was spent in Knoxville, with Tennessee hosting the NCAA Regional and Super Regional rounds. During those tournament games in Knoxville, the fans truly became a part of the team.

And for Tennessee head coach Tony Vitello, he is eagerly counting down the days until the fans return.

“More than you know,” Vitello said about his excitement to be around the fans and environment again. “I can’t put it into dictionary-type words, but I get a little energy- it’s better than coffee, you bringing that up, let’s put it that way.”

During the post-season tournaments that Tennessee did host earlier in 2021, each game was at max capacity. In fact, Tennessee athletics had to bring in pop-up bleachers to allow more fans in the stadium. And, they even closed down the area around the stadium for a watch party. When Tennessee fans went to those games, they weren’t just going to watch a baseball game. They were going to be a part of a rowdy crowd, an electric environment, and a building brand.

“I think our team has a brand name on the field,” Vitello said during a press conference on Thursday. “I could ask you guys in the room because you guys travel around, what are this team’s fans like? How would you characterize this team’s fans? And you would probably have a quick two to three words about how they act, reputation, fair or not, stereotypes. You could stereotype our fans in whatever way you want, but they don’t sit on their hands. They are rowdy. And, they are into it.”

Tennessee Baseball HC Tony Vitello talking about his anticipation to be around the fans again after the outpouring of support last year. pic.twitter.com/tAad0ceyPo

Tennessee finished the 2021 season 29-9 at home. Lindsey Nelson Stadium was one of the daunting places to play last year with the combination of the team’s talent and fan support. Not only did the environment, particularly from the student section, motivate the Tennessee players, but it also got under the skin of opposing teams.

“It impacts the way our guys play, our kids feed off of it, and it quite honestly makes the other team uncomfortable,” Tennessee HC Tony Vitello said on Thursday. “And, having said that, there’s also other teams that continually compliment the things they saw while inside our stadium this past year. That’s me trying to put my arms around a topic that’s one of my favorites, and we are appreciative of it, and we recognize how it can help us be successful next year.”

After the success that Tennessee baseball had in 2021, Tennessee athletics made the critical move to extend Vitello’s contract. In addition, they also set into motion additional upgrades for the stadium, something that Vitello believes will, and already has in some cases, make a big impact on Tennessee.

“So construction or not, whenever it happens, if we can just let all [the fans] in, and even add some spots to just surround the whole thing… maybe it makes the opponent uncomfortable or not, I don’t know, I don’t have control over those guys. But what it will do is it will excite our kids to come to the park every day at home. And then recruiting… the most important word in this whole deal. It’s helped us a lot and the kids recognize it.”

The Tennessee Baseball fall schedule can be found here.