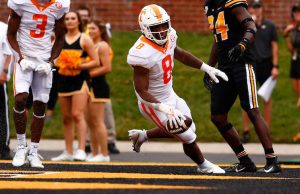 Tiyon Evans has three Tennessee touchdowns in the first quarter against Missouri. Photo by Tennessee Athletics.

The Tennessee Volunteers’ offense ran like a well-oiled machine in the first quarter against Missouri. The Vols scored a touchdown on their first six offensive possessions, a streak that carried through the first quarter and into the second. However, while plenty of Tennessee’s players have stand-out statistics from the first fifteen minutes of play, one stands out in particular.

Tennessee RB Tiyon Evans had three touchdowns and 107 yards on four carries in the first quarter. Evans also broke out a 92-yard touchdown run on the first play of Tennessee’s third drive of the game.

Additionally, the run by Evans was the third-longest run in Tennessee program history.

That run from Evans was his second touchdown in the first quarter. Initially, Evans scored on the second drive of the day for Tennessee. Evans took in a six-yard touchdown rush on only his second carry of the day.

Then, after a Jeremy Banks interception took the ball down to the 1-yard-line, Evans was there on the next play to punch in his third touchdown for six points.

In total, Evans finished with 107 yards and three touchdowns on his four first-quarter carries. After fifteen minutes of play had elapsed, Tennessee was leading Missouri 28-3.