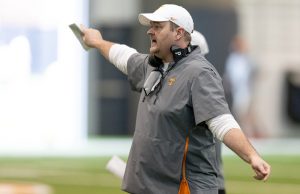 The Tennessee offense put up 62 points against the Missouri Tigers, the most for the Vols since 2016. Additionally, 62 points are the third-highest point total in Tennessee history. The Vols scored 65 points against Vanderbilt in 1994 and put up 63 against Missouri in 2016 and Arkansas in 2000.

However, looking at the 2021 season alone, Tennessee is averaging 40.8 points through five games. The Vols have only scored less than 34 points on one occasion, their SEC opener in Gainesville against Florida. With as good as the Tennessee offense has been, the man behind the scheme, head coach Josh Heupel, has caught the attention of former Alabama quarterback and current ESPN analyst Greg McElroy.

“You look at the first three games for Tennessee,” McElroy said on the Paul Finebaum show Monday. “There were plays to be made. They just didn’t hit them. Now they’re starting to hit some, and it’s really, really fun to watch. Josh Heupel deserves a ton of praise.” 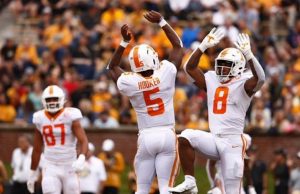 During the 10-game schedule in 2020, Tennessee scored a total of 215 points. After the Vols’ scored 42 points in the second-to-last game against Vanderbilt, the Vols had 202 total points. Under the Heupel administration at Tennessee, Tennessee has 204 points through just five games this season. Yes, there are several variables at play, such as the strength of the schedule. But whether it is the statistics or the game film under evaluation, it’s clear to tell that Heupel has transformed the Tennessee offense.

Josh Heupel has had to overcome several early obstacles during his first few games as the Tennessee coach. The biggest of which points towards injuries. On the offensive side of the football, Tennessee has been missing starters from each position group all year. The Vols have lost quarterbacks, running backs, wide receivers, and offensive lineman for specific games, even though all have made a return to date.

However, even with the challenges, Heupel has found a way to overcome them from a schematic perspective. Otherwise, it is up to the players to execute the things that they are coached to do.

“College football is a game of 12 weeks, but it’s a one-week season every single week,” Heupel said on Monday during his opening press conference. “I’ve talked to the football team about that. If you try to compare and contrast scores from week to week, none of it’s going to make any sense. It’s about your same competitive spirit, competitive composure. When you get out there, it’s about your process leading up to kickoff. If we continue to grow in that, that will lend itself to better and better results as we go through the season.”