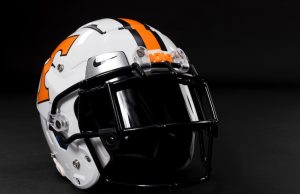 For the first time since 2009, the Vols will be back in black this weekend on the football field.

Tennessee will debut its new all-black uniform this Saturday afternoon against South Carolina. The look will feature a new look from torso to toe with black pants and an updated black jersey. However, Tennessee also revealed their redesigned white helmet. While the look has been fairly accepted on social media, the white helmet left many questioning why the all-black look wasn’t expanded to the top.

On Wednesday afternoon, after the announcement, former Tennessee WR Jayson Swain gave some clarification to the rumored black helmets on Twitter.

“Plan was to have alternate helmet with uni,” Swain, host of The Swain Event, said on Twitter Wednesday. “Because of supply chain issues, it crushed the plan for the black helmet. Every avenue was explored. Kudos to equipment team for mods to white helmet to make it work.”

According to the report, it does look like Tennessee did intend to debut alternate helmets with the uniform.

The Vols have worn black before, again when they took on South Carolina in 2009. Lane Kiffin was the head coach of Tennessee at the time and will return when the Vols host Ole Miss next week. During the 31-13 win in Neyland Stadium, Tennessee wore their orange and white double-striped pants with the black jersey. The jersey itself was black with an orange collar, orange numbers, and white trim around the numbers. Although, it did lack nameplates on the back.

The most significant differences between the 2009 and 2021 versions are most noticeably the pants, which have adopted the “dark-mode” look from the jersey. In addition, Tennessee took away the white trim around the numbers, shifting to solid orange this year. Additionally, Tennessee will wear black and orange socks with the uniform this year, as opposed to the white ones in 2009.

And, of course, the helmet. While the first time around saw the Vols wear their traditional gameday helmet, Tennessee is switching things up this year. The new “dark-mode” helmet will feature black trim around the solid orange stripe down the middle, and outlining the Power T on the sides.

However, after Swain’s tweet on Wednesday, it does look like Tennessee did plan on matching all-black helmets. Unfortunately, due to supply chain issues, the look never came to fruition.

Will Tennessee break out the black helmets with the uniform in 2022? Or stay with the current design? Only time will tell.

Tennessee will debut its new all-black “dark mode” uniforms against South Carolina this Saturday. ESPN2 will have the broadcast at noon ET.